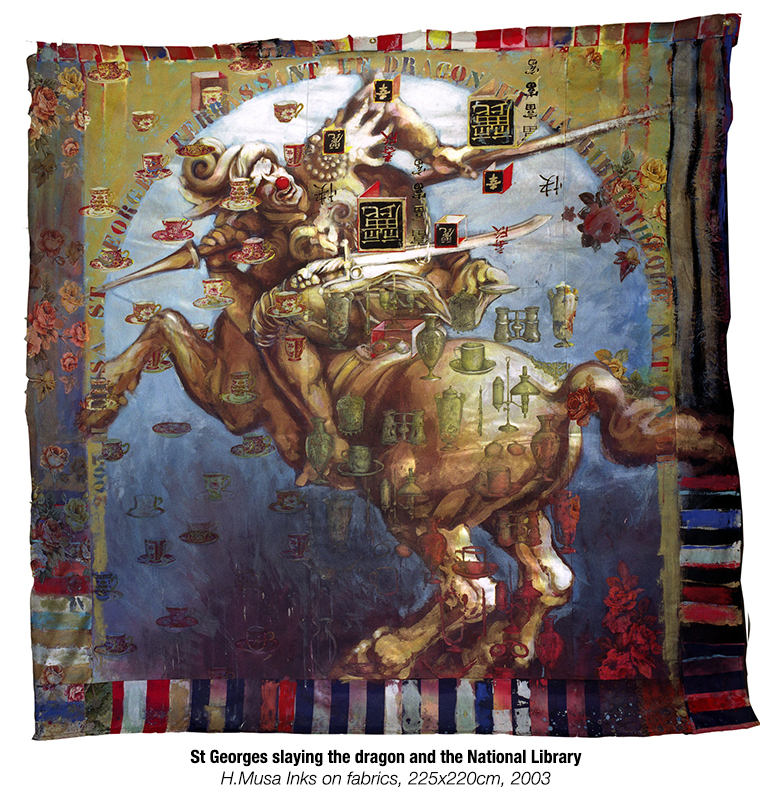 When you study the history of European Art, you discover that you can not understand the European tradition of painting unless you read the Bible. Then while reading the Bible, you discover that the whole modern culture is inspired by the biblical literature. The European capitalist civilisation used the Bible to spread its domination on the world. The Bible became the book of winners and « the winners » configured the global cultural scene according to their interest. Even the idea of the « Artist » itself is a biblical idea.

At the end of the day, a good painter is a catholic painter as « a good Indian is a dead Indian ». One day, Humanity will exceed the biblical dimensions of painting, but until that day, where « The wolf will live with the lamb, the leopard will lie down with the goat, the calf and the lion and the yearling together; and a little child will lead them. »(Isaiah 11 : 6).Until that day, my art work is a desperate attempt to divert the biblical tradition of painting in a more humanistic interest.

In this new series I am sharing with you old and recent works: THE SAINTS. Saints help, rescue, and do so much more. Sometimes they are positive, sometimes their role/story is much more ambiguous. To me they are interesting characters because of the powerful symbolic values they generate. St Georges, St Irene, St Sebastian, St Christophe, St Thomas, and many others appear in my work. 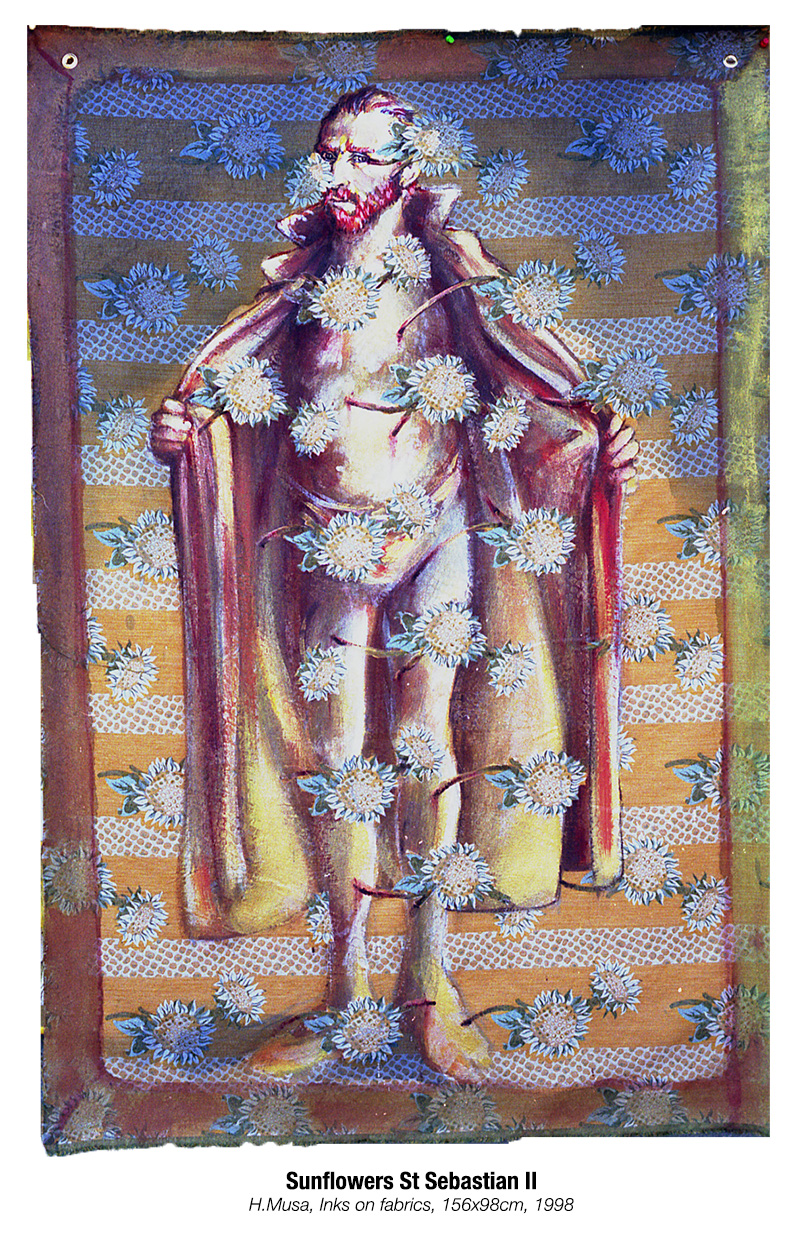 SAINT SEBASTIAN — THE MARTYR [THE SAINTS #2]

He’s one of the Saints who appeared the most in my works. St. Sebastian is not only the artists’ « Patron Saint » (he’s one of the most represented Saints in the Renaissance artists’ works), he is also a central figure among the Christian Saints. He is an ambiguous character who sees the meaning of his life, in his death. He survives the archer’s episode, is healed by Sainte Irene, and once again heads towards death.
In my works, he’s sometimes Van Gogh, sometimes Che Guevara, which I both consider modern figures of the Christian martyr. In my interpretation of Saint Sebastian’s miracle, the miracle is not that Saint Sebastian survives a certain death at the hand of the archers, but that he transforms the arrows into flowering branches. He brings the arrows back to their original vegetal form. Which Saint today could do so and transform tanks into agricultural combines? 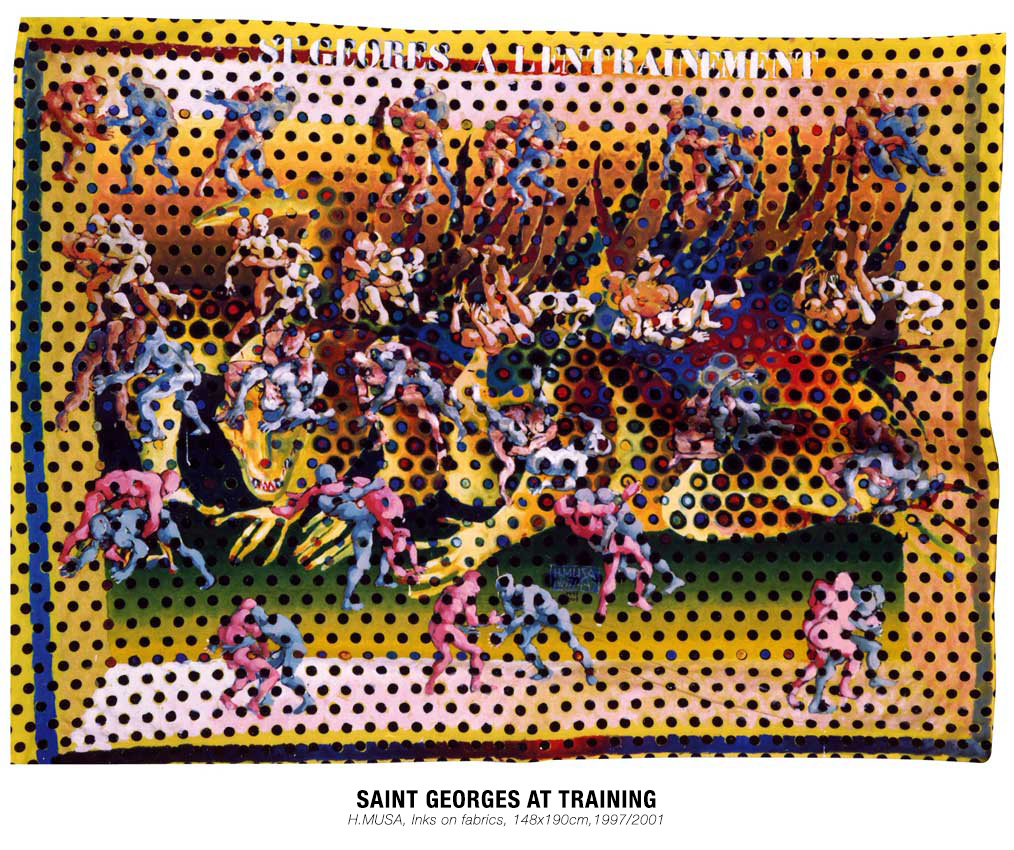 St Georges, the saint who slayed the dragon, is a universal character who exists even outside of Christian tradition. Slaying a dragon is a violent gesture. To kill the dragon one must be as violent or even more violent than it. It’s a rather embarrassing situation for Christian morality which tends to opt for non-violence resolution in conflict situations. But can a religion, as a social organization project, do without violence? 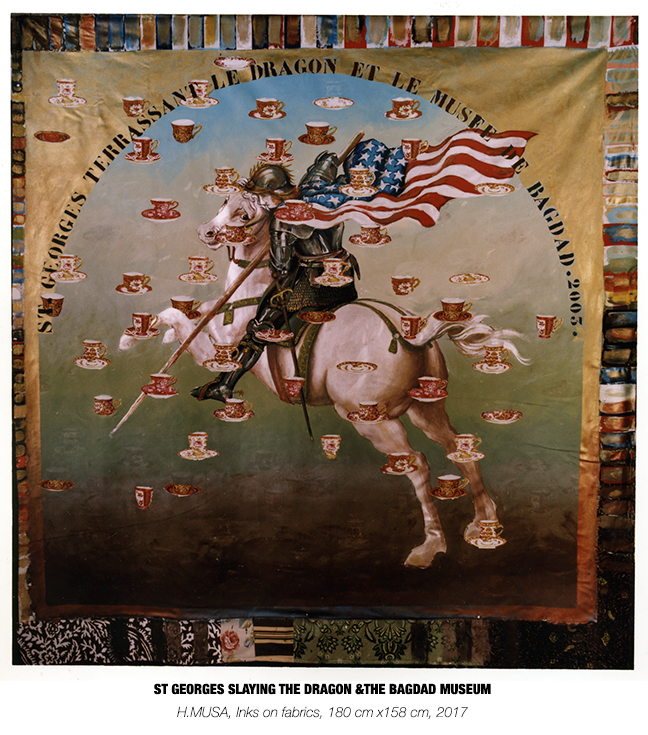 SAINT GEORGES - WHAT MAKES GEORGES SO ANGRY? [THE SAINTS 3bis]

In 2001, Georges W. Bush, the American President, invaded Afghanistan in the name of the « Global war on Terrorism ». He also wanted to liberate the Afghan women. Hundreds of thousands of Afghan civilians got killed or wounded.
In 2003 The USA invaded Iraq to destroy the supposed « Weapons of Mass Destruction ». Almost 3 millions Iraqis got killed or wounded.
In 2011, Nicolas Sarkozy, the French President led a NATO military coalition to attack Gaddafi’s Lybia. About 400, 000 Lybians got killed or wounded.
Today nobody knows exactly the price that the West African societies are paying in the the French « war on terrorism ».
These wars, justified by the desire to save women, support democracy and to free the people from oppressive regimes, drove the « liberated » countries into total disorder and endless political anarchy. But beyond the humanitarian justifications that Nato nations propose in their media, there are the untold economical motivations concerning the Oil, Gold, Uranium etc..This is where the question about Saint Georges occur : What really motivated Georges to risk his life fighting with Dragons ? 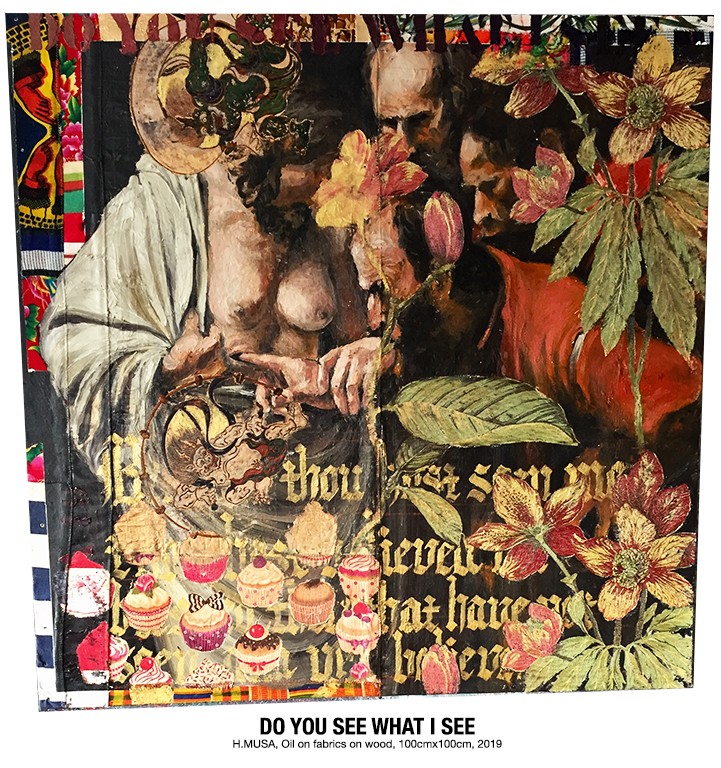 Inspired by the Caravaggio’s painting «The Incredulity of Saint Thomas »,1602.

St.Thomas is commonly known as "Doubting Thomas" because he doubted Jesus' resurrection when first told of it. He needed to see Jesus wounds :"Except I shall see in his hands the print of the nails « .. », and thrust my hand into his side, I will not believe." But when Jesus appeared later and invited him to touch his wounds and behold him, Thomas showed his belief by saying :"My Lord and my God". To what Jesus answered: "Because thou hast seen me, thou hast believed. Blessed are those who have not seen, and have believed." John, 20 :29

St.Thomas story challenges the limit of seeing. For Thomas, seeing was not enough because he needed to touch Jesus wound. But Jesus, who invites Thomas to touch his wounds, knows that beyond touching there is nothing. Nothing but God restoring the terrible emptiness of human existence with the magic of literature : Love, charity, forgiveness, blessings and so on. We only see what we need to see. If you don’t believe try « the Duck/rabbit test » and you will see !

The legend says that St. Christopher wanted to serve « the greatest king there was » . A hermit, who instructed him in the Christian faith, suggested that, because of his size and strength, Christopher could serve Christ by assisting people to cross a dangerous river, where they were perishing in the attempt. The hermit promised that this service would be pleasing to Christ. One day St Christopher carried a child, who was unknown to him, across the river, before the child revealed himself as Christ. Therefore, St Christopher is the patron saint of travelers.

Naturally, St. Christopher is the best man to help Africans who perish crossing the Mediterranean sea to Europe.

When I started working on Hieronymus Bosch's image of St Christopher, I was not satisfied with St.Christopher portrait. First I wanted him to look like one of these modern heroic martyrs dedicating their lives to save the world. I thought of Che Guevara or Vincent Van Gogh but the tragic adventure of Che Guevara and Vincent Van Gogh wouldn’t fit with the legendary force of St.Christopher, so I shifted to the repertory of the American heroic figures :Superman, Batman, Iron Man, Captain America, John Wayne Obama etc…Finally, I picked batman, the indestructible hero of American individualism serving the greatest kings of the Liberal market economy.
He promises the African refugees no less than happiness in his global city of Gotham.

« Madam Sebastian » was part of my art installation project, in the collective exhibition "TOLD UNTOLD RETOLD" curated by Sam Bardaouil and Till Fellrath, in Doha (Qatar), in 2010.
The title of my installation project was "The untold stories in the Arabian nights".

The drawing above was the model for a human sized fountain taking the shape of a woman dressed in a black "Abaya". A system of pumps hidden inside the statue would pump « blood » continuously flowing out of her. Facing the wall, Madam Sebastian stares at a large calligraphy image of "fa" arabic letter representing a nude.

This naked figure illustration was not well received by the curators. "For sociological reasons", they were worried that it might shock the audience as well as the funders of the exhibition.

This is why my story remained untold.
It got me wondering about the job of art curators.
Who curates the curators?

Read further about this episode "CURATING THE TRUTH". 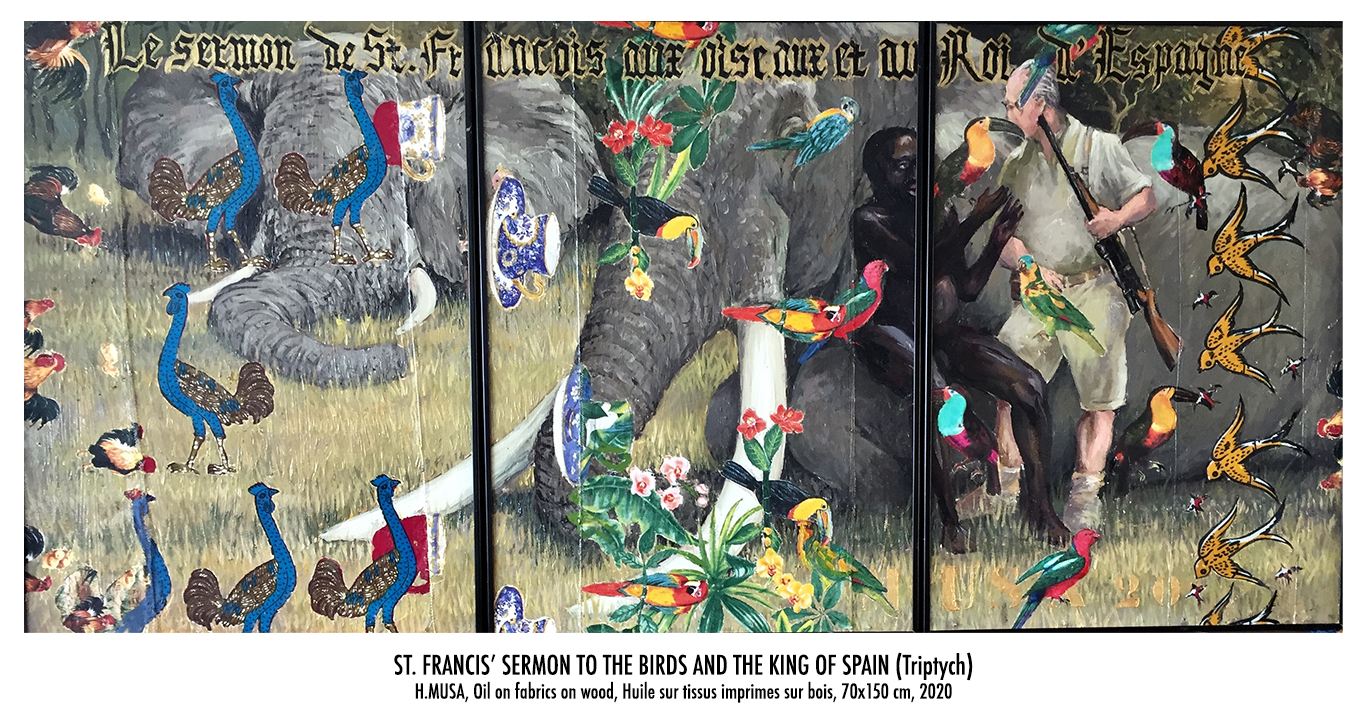 Saint Francis of Assisi is known to be the Patron Saint of Animals and Ecology. He considered animals as his "brothers and sisters" and prayed that God would work through him to help them. Legends say that Saint Francis once convinced a wolf not to attack humans. Saint Francis seems to be more successful with animals than with humans. He couldn't convince the King of Spain to give up his favorite activity of killing animals.
Nobody would have known about Juan Carlos hunting trip in Africa in 2012, if the old king had not been accidentally injured in Botswana. The news about the King of Spain hunting elephants in Africa has caused outrage among many, but the King Juan Carlos has apologized to the Spanish people for going on a hunting trip in Africa, while his country was in the midst of an economic crisis (an Elephant hunting licence costs 30,000 euros in Botswana). "I'm very sorry, I made a mistake. It won't happen again," the King said, as he left San Jose hospital in Madrid.
Spanish media reported that the Spanish people has accepted the kings apologies but nobody said if the African elephants ("Brothers and sisters" of Saint Francis of Assisi), accepted Juan Carlos apologies !..
May Allah maintain the economic crisis on Spain so that the king can not spend money on African hunting trips any more. 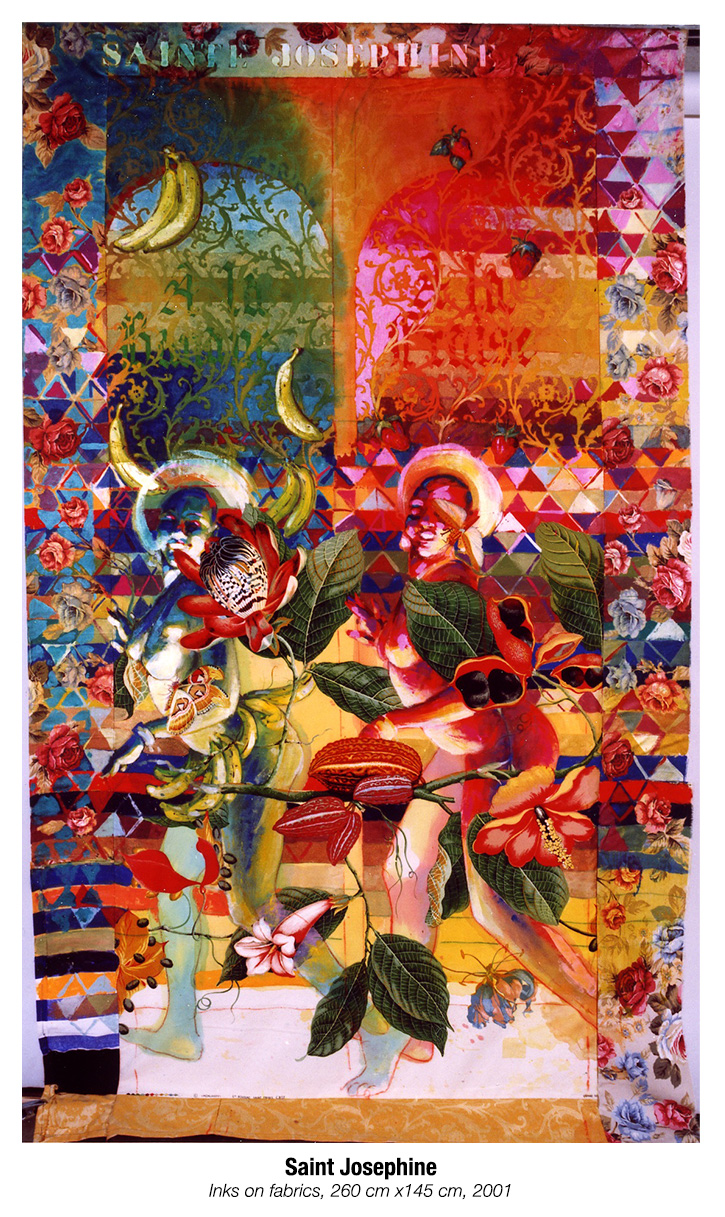 She was created and used by the European intelligentsia as a figure of black womanhood as well as an icon of the « African Woman ». She took part in galas to finance French ethnographic expedition "Dakar - Djibouti" in Africa. Looking closer to the definition of the word « canonize », we realize that the story of Josephine Baker is very similar to one of Christian Saint. The only difference is that her canonization hadn’t much to do with the Church. Josephine was the saint patron of Art-africanism and her emblem is a banana. --- READ MORE about ST. JOSEPHINE: "THE MAKING OF SAINT BANANA".

To see more of my works on maps, go to the Artwork section of this website.