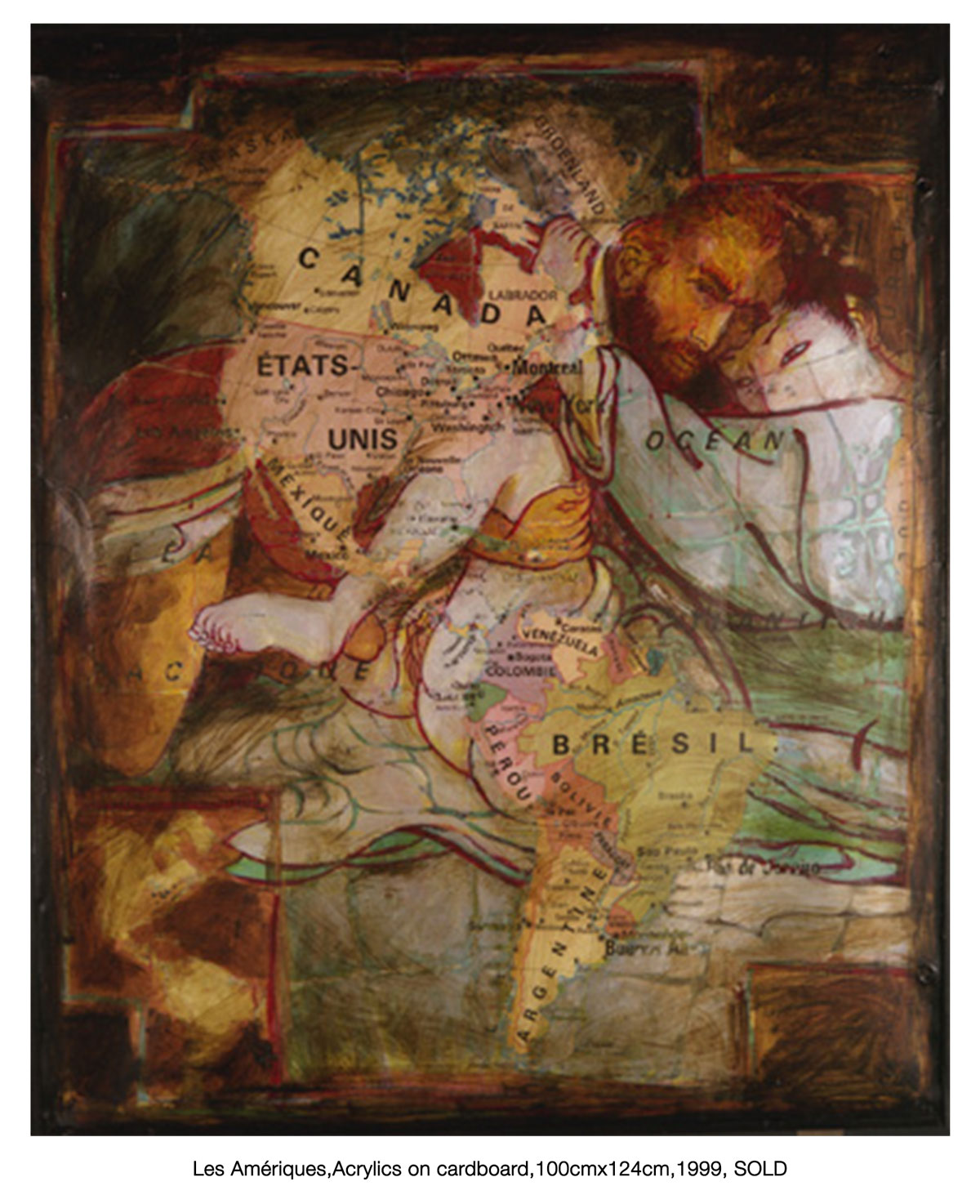 JAPANESE « SHUNGA » THEMED WORK --- Twenty years back, I came upon this book « Manuel De L’Oreiller ». In the Japanese pillow books tradition, it referred to the early modern Japan illustrative style « Shunga » (春画). Beyond the aesthetic appeal, these illustrated books were also used to provide sexual education to young couples. This inspired me to start a succession of images where I would integrate the « Shunga » style of illustration. Some on old maps, others on printed fabrics, some others integrating notorious characters of modern history. 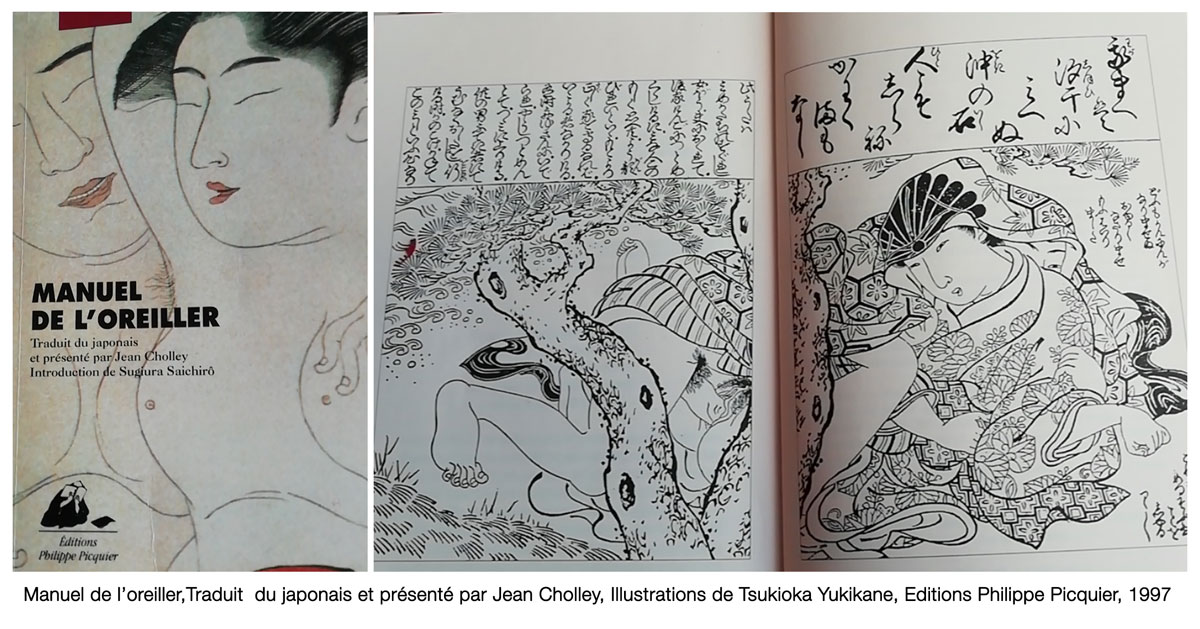 SHUNGA THEMED WORK #1: « THE ANNUNCIATION»
One of the most famous biblical scene represented in arts through the times: angel Gabriel appears to virgin Marie and announces to her that she will bear the son of God, Jesus. Here, I attempted to re-visit this classic theme in the era of globalization and to incorporate the Japanese « Shunga » illustration style on old maps or printed fabrics as an interconnected background. 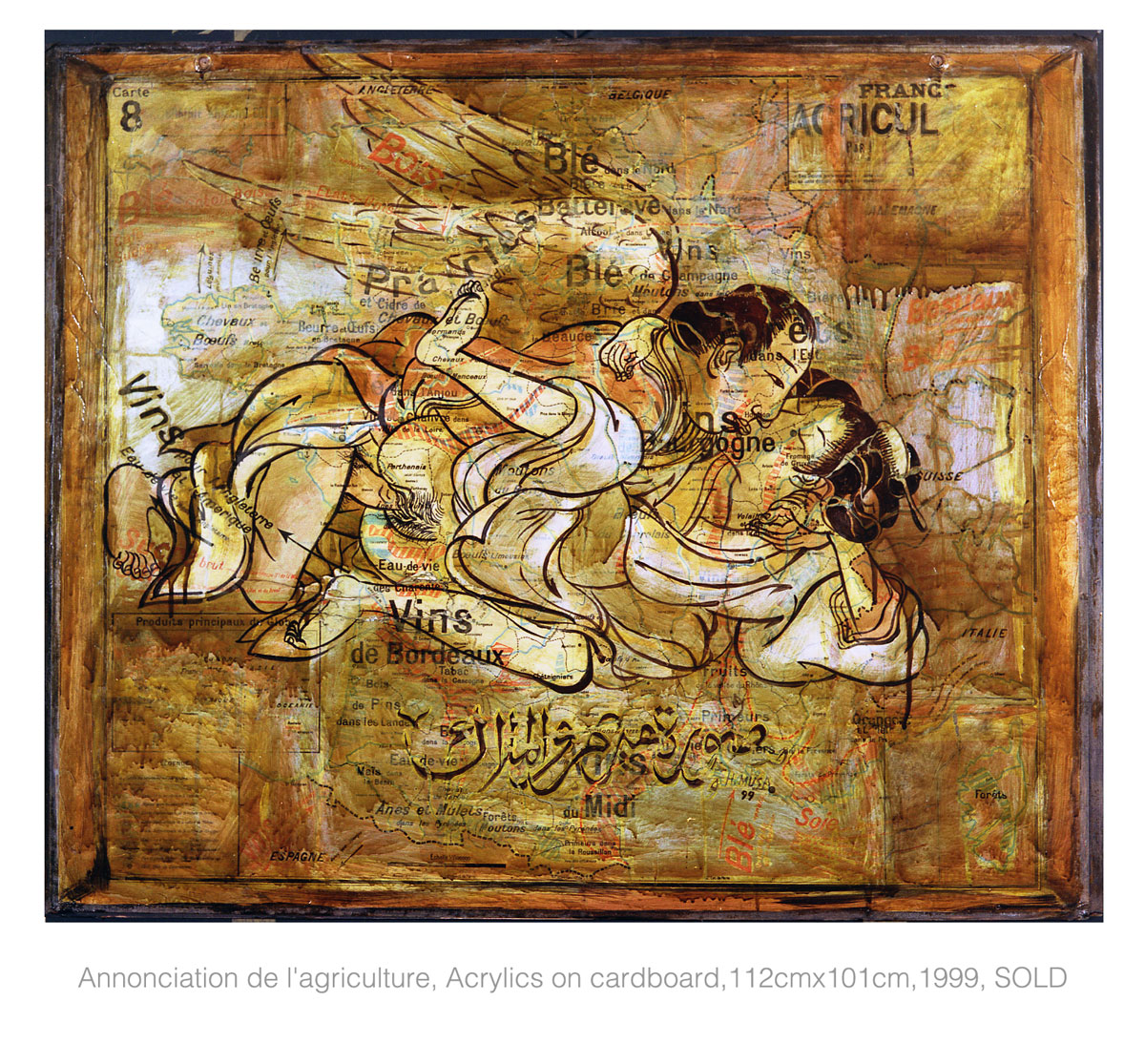 SHUNGA THEMED WORK #2: « THE HEALING OF ST. SEBASTIAN » --- Persecuted for his faith as a Christian, St Sebastian is told to have been tied to a pole and shot by dozens of arrows by the soldiers of the Roman empire. He did not die this time though and was rescued and healed by St Irene. This scene is also a very popular subject for 17th century painters. In my images, I associate him with Van Gogh that I consider as a modern time martyr. I also integrate the Shunga style illustration as an attempt at depicting the relationship between St Sebastian and St Irene. 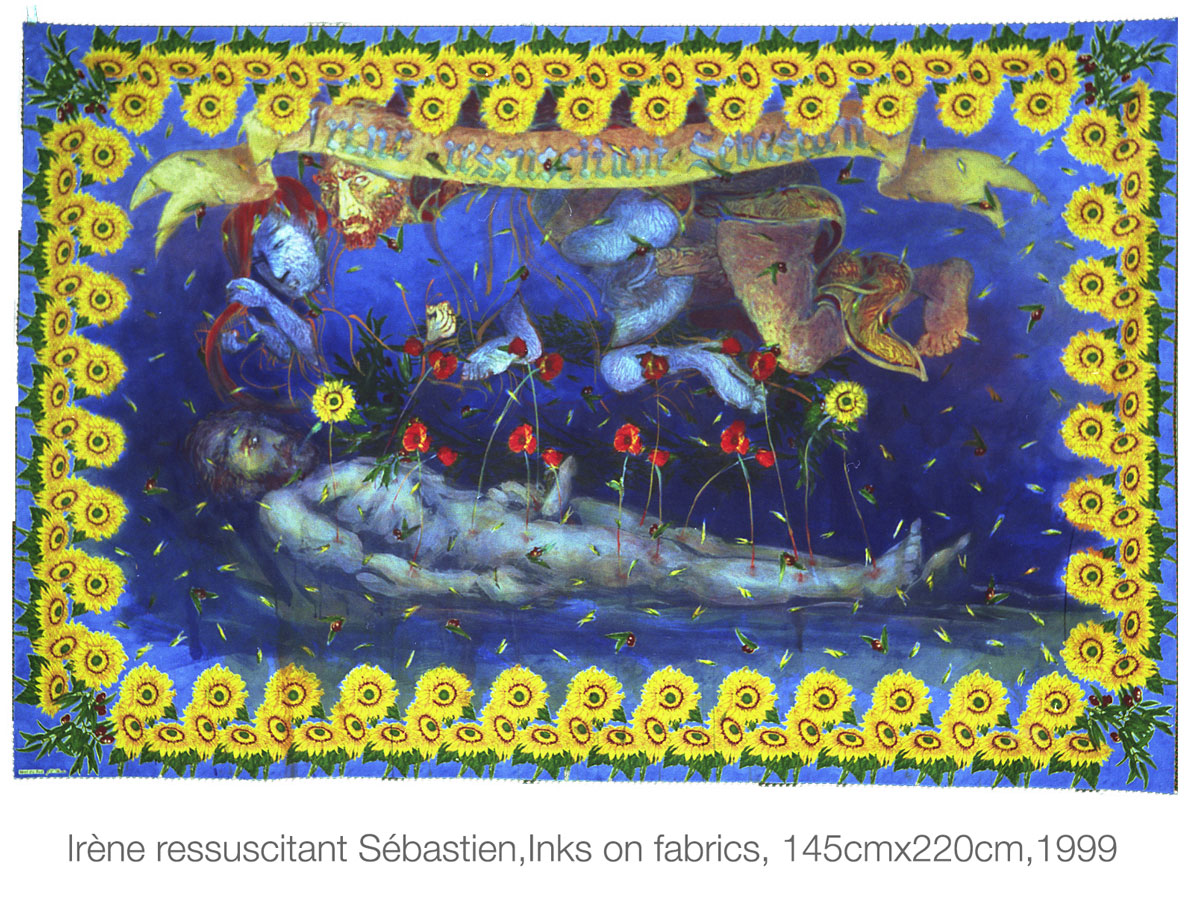 SHUNGA THEMED WORKS #ANECDOTE: "THE INTERRUPTED EXHIBITION" - PONT SAINT ESPRIT, FRANCE, 2014. --- In 2014 I was contacted by the responsible person of a bookshop in Pont Saint Esprit. He wished to exhibit my work in a space adjacent to his bookshop, where he regularly held cultural events (talks, conferences, exhibition, etc.). I accepted his invitation and the librarian came to my workshop in Domessargues to select with me the works that would be exhibited at this exhibition planned for the beginning of 2015. The week-end before the start of the exhibition, my wife and I got to the bookshop and hang up the selected works. Two days after the beginning of the exhibition, the bookshop’s responsible person called to inform us that one of the work selected, « The Balkan States » had provoked the anger of one of his clients who found the image chocking, pornographic even, and that such an image should not be exhibited in a public venue where children might see it. It was this woman’s child who’d noticed the image and asked his mother about it. As a result, the librarian had already taken the image down. I told him that in that case I would rather take down the whole exhibition. I went there the day after and told him that I could not accept my art work to be censored and that I would rather not exhibit at all. 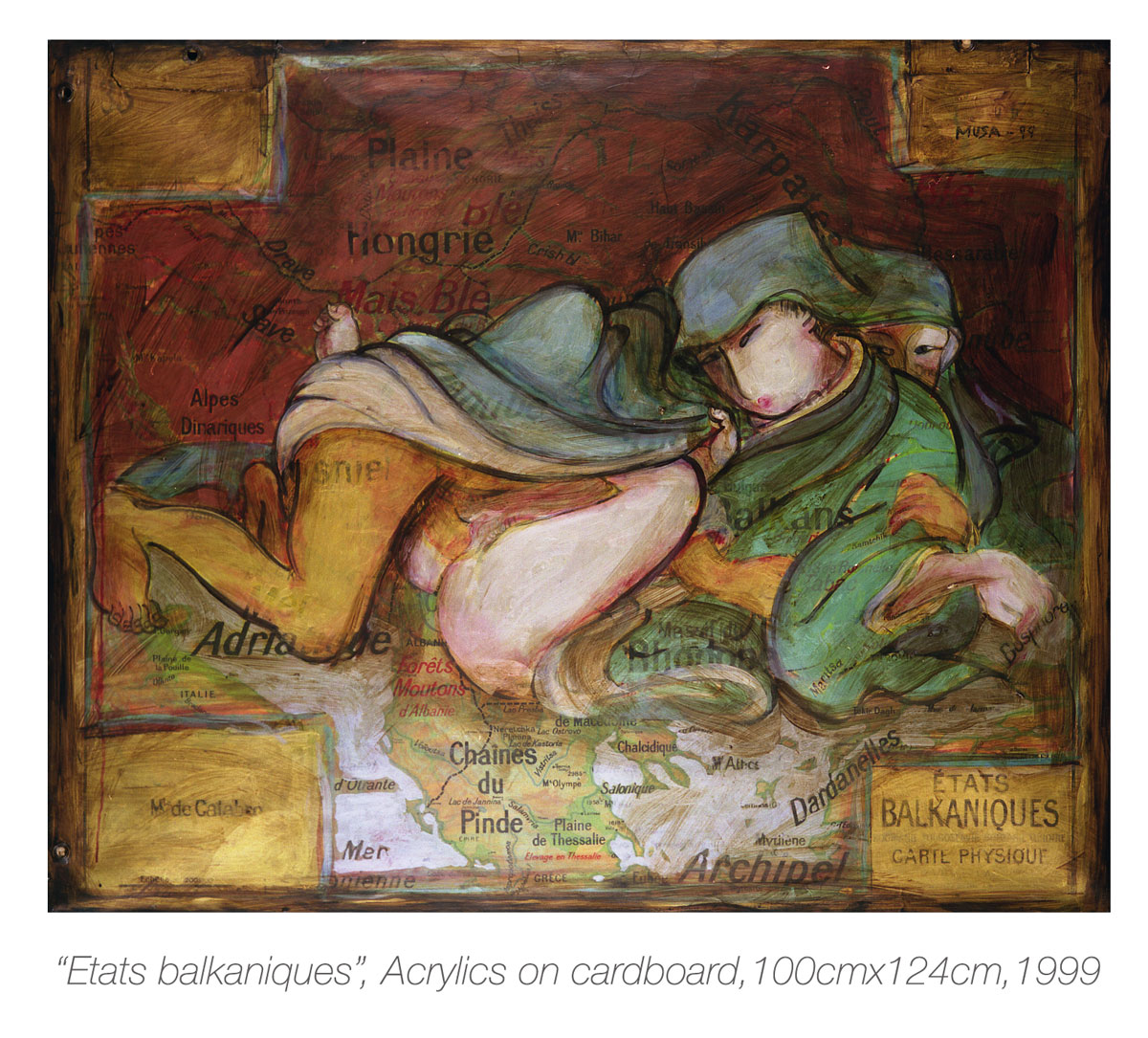 SHUNGA THEMED WORKS: « THE OBSCENITY OF MAPS »
For many of my « Shunga » themed works I used old maps as a background. Many of these old maps I actually picked up from school trashes as they had become obsolete. What fascinated me with these old maps but also maps in general is their pretention to show the reality. As images, maps are a naturally false representation of reality. As cultural objects ,I think no map is innocent because people usually draw maps to mark the limits of the land under their control (or the lands they want to control).All the great wars were conducted around maps and millions of people died because some one sends them defending or attacking a line on a map. All this history makes maps look more obscene than the conventional folkloric images of obscenity. 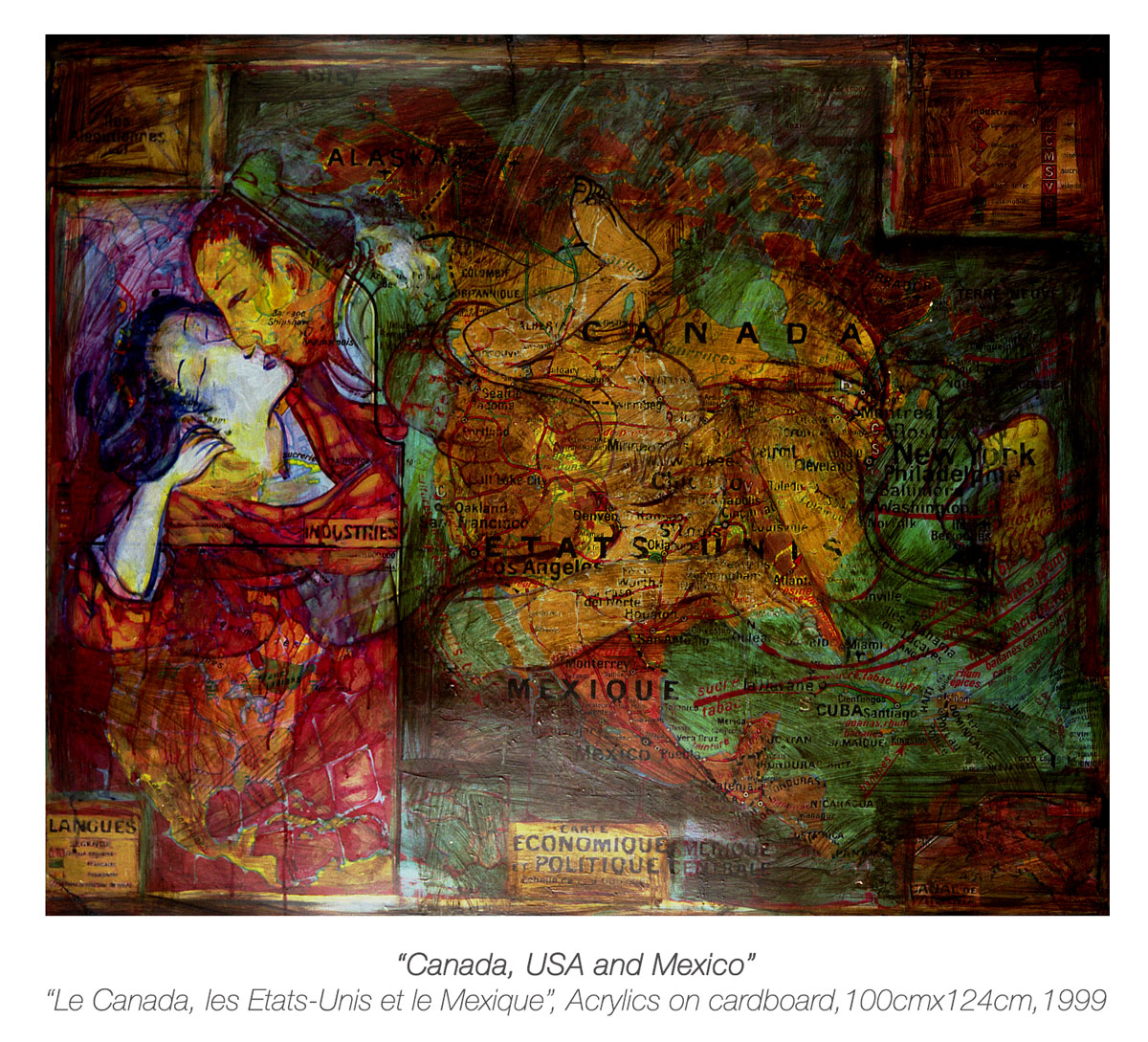 See all the SHUNGA THEMED ARTWORKS in the Artwork section of this website.