« My calligraphy is not about text. It looks like Arabic writing but, most of the time, there is no text in it. It is completely impossible to read. For me it’s just a way of making drawings, making images. Sometimes you might find words, but it is just meant to help the image come out. » 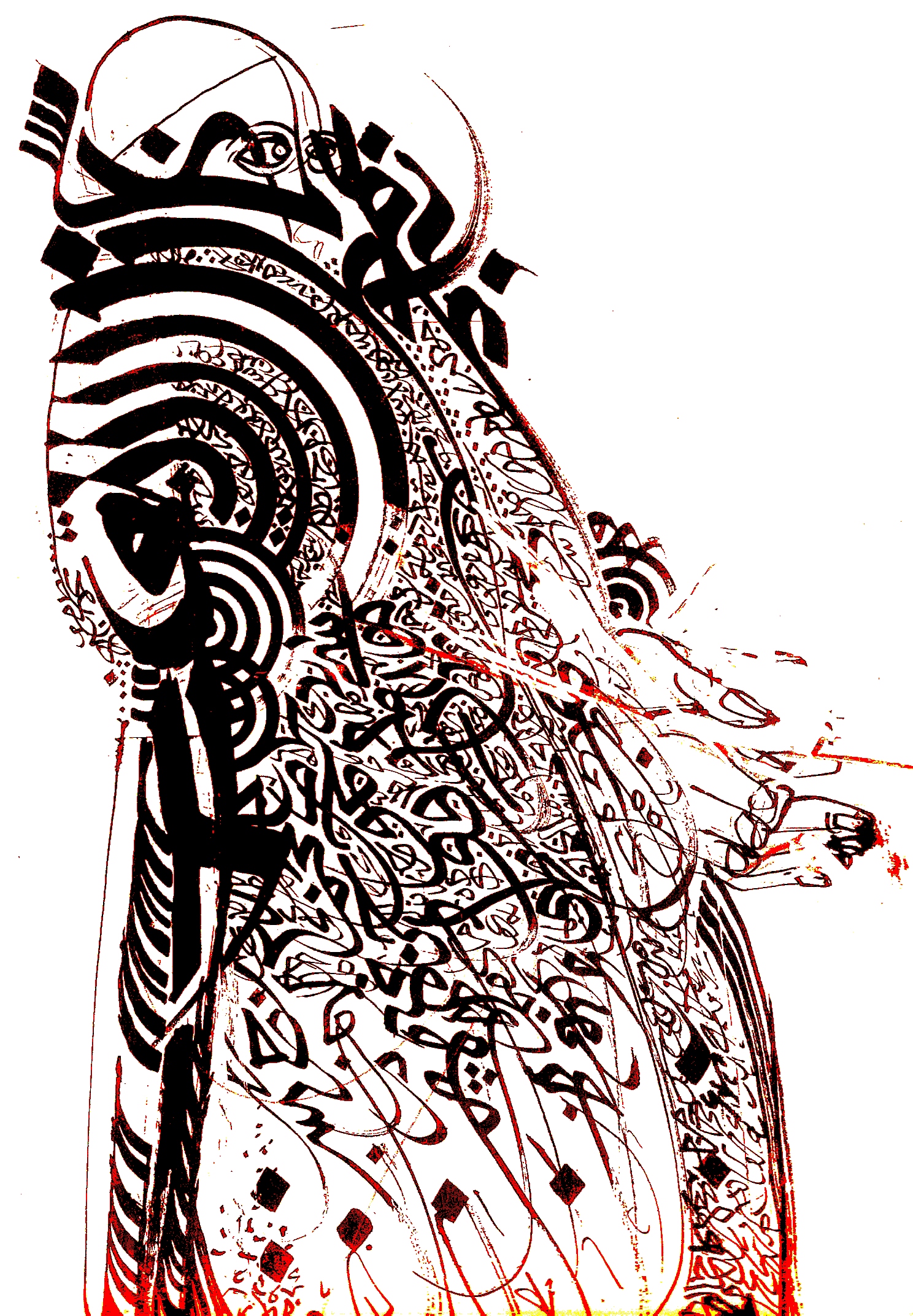 I learned how to write before going to school because I wanted to write like my elder brothers. I think I was six when I started to make signs that look like writing but it was fake writing. When I joined the school I learned the real writing but I was somehow disappointed by the lack of graphic liberty that I enjoyed in my fake writing.

One day, my brother Ibrahim wrote my name on my school bag in a fine calligraphy. He used two pencils to obtain the variations of the «Diwani» marks. When I went to school this calligraphy was the admiration of everybody. From that day, I started to look at calligraphy as something different from writing. When I first came to Arabic calligraphy (I think I was 13 years old) it was related to writing activity in an intermediate school mural journal (« Assalam » = peace in Arabic). I remember I used to write the title in an « artistic way ». I was not aware about calligraphy. For me it was just drawing. […]

In 1969, I discovered Ibrahim El-Salahi’s illustrations published in a poetry book « Nar Al-majazeeb »(The fire of the Darvish), collection of poems by the Sudanese poet Mohamed El-Mahdi Majzoub,(1919-1982). El-Salahi mixed Arabic calligraphy with the Chinese tradition of ink work. I think I was excited by El-Salahi's illustrations because I felt that he deliberately ignored the scriptural dimension of the Arabic writing in order to reach «the inner identity» of writing considered as the singularity of a gesture able of materializing emotions. 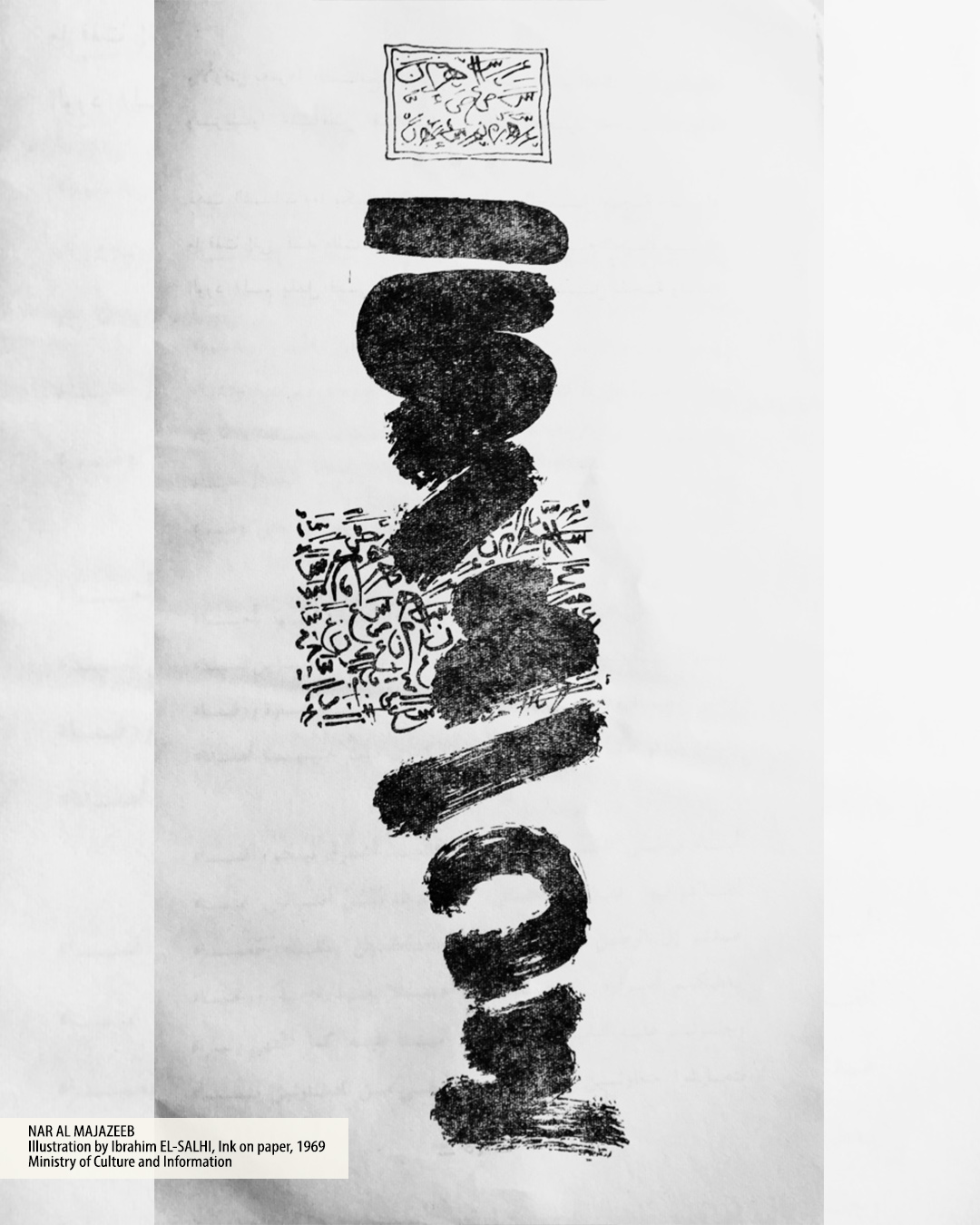 Over the years, through different projects, I explored the possibilities offered by calligraphy as a tool to create images. 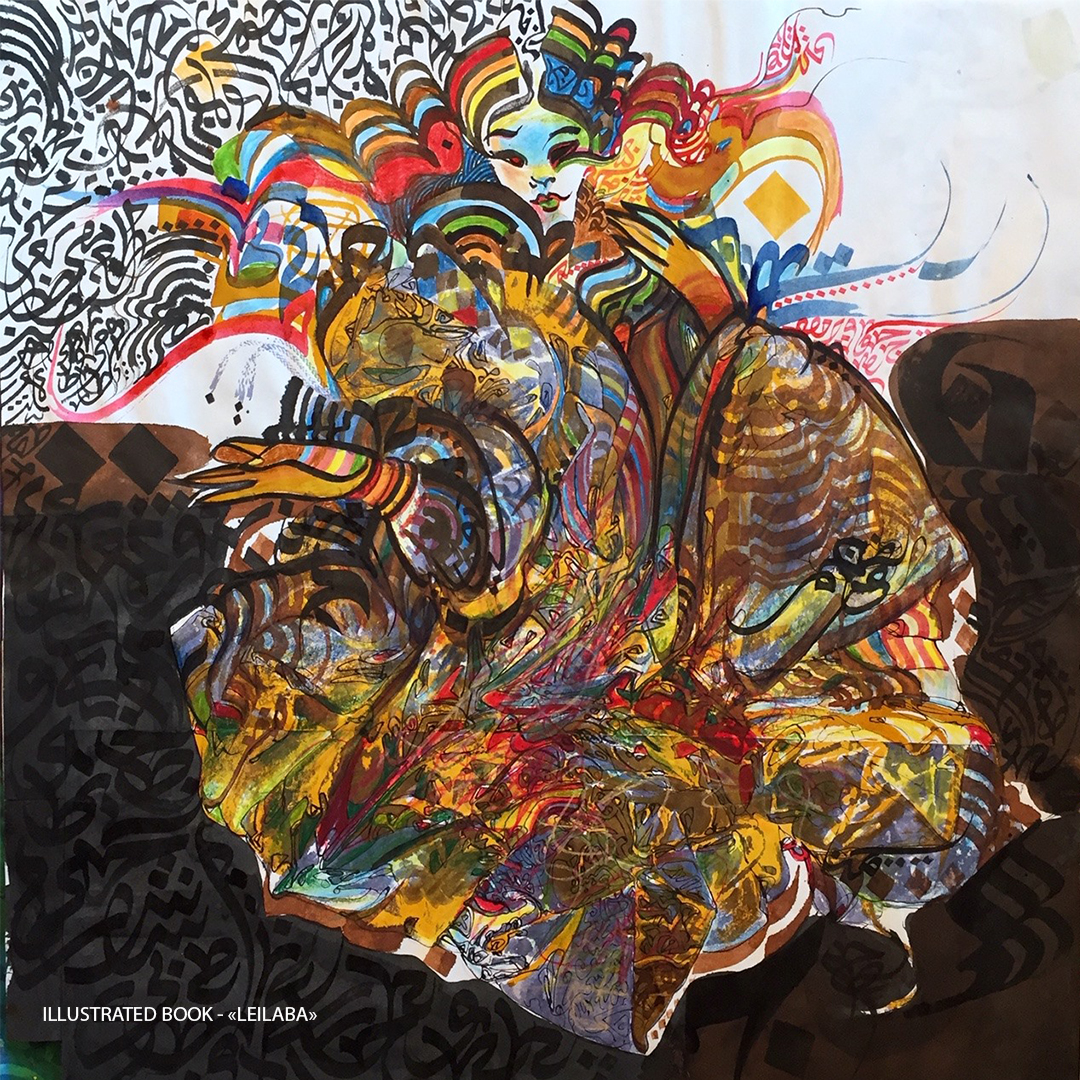 One of my earliest « exploration » was creating animal images. MON PREMIER DICTIONNAIRE, TU L’AS VU L’OISEAU, or INCHALLAH were part of these explorations.

ZOOMORPHIC EXPLORATIONS - « MON PREMIER DICTIONNAIRE (=My First Dictionary) is actually a zoomorphic alphabet book which brings together western and eastern calligraphy. The vocation of this remarkable black and white illustrated book is thus not only educational but esthetic as well. The transition from the written character to the plastic sign (…) does not solely concerns the young apprentice, but any eye fascinated by the outline of writing. » Book review - TDC N°706, Dec.1995 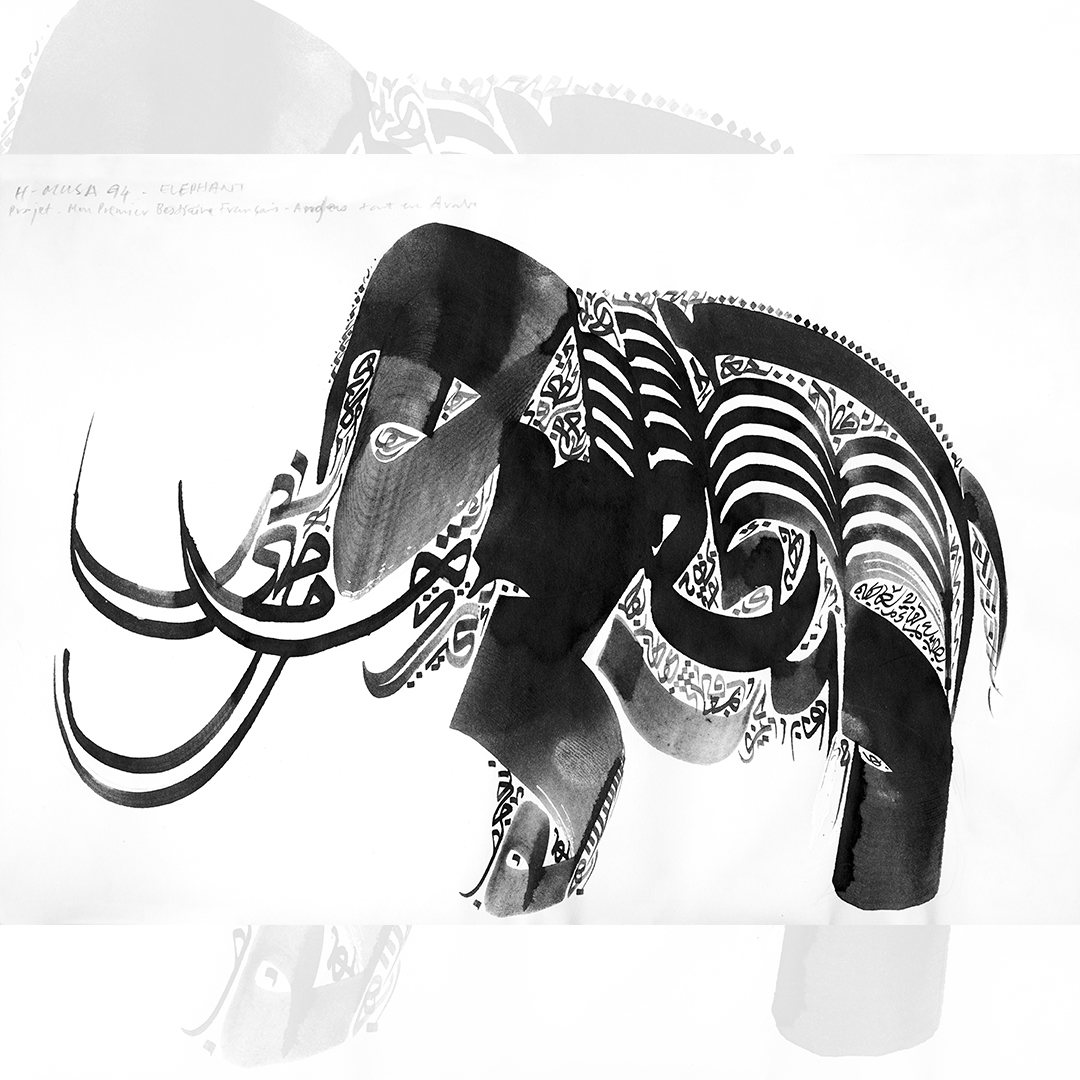 WHAT GOES FASTER THAN AN ANTILOPE? - The Gazelle liaison helicopter costing 7 million Euros, the price of 35 combine harvesters.

WHAT IS SLYER THAN A CROCODILE? - The Cobra fighter helicopter costing 70 million dollars, enough to provide treatment for 7000 AIDS sufferers.

These are the questions I’ve asked myself when working on the PAPIER COUPÉ (Paper Cut) book project AFRICAN BESTIARY published back in 2015. Or, why does weapon manufacturer chose to name war weapons that kill thousands everyday after the names of wild animals? 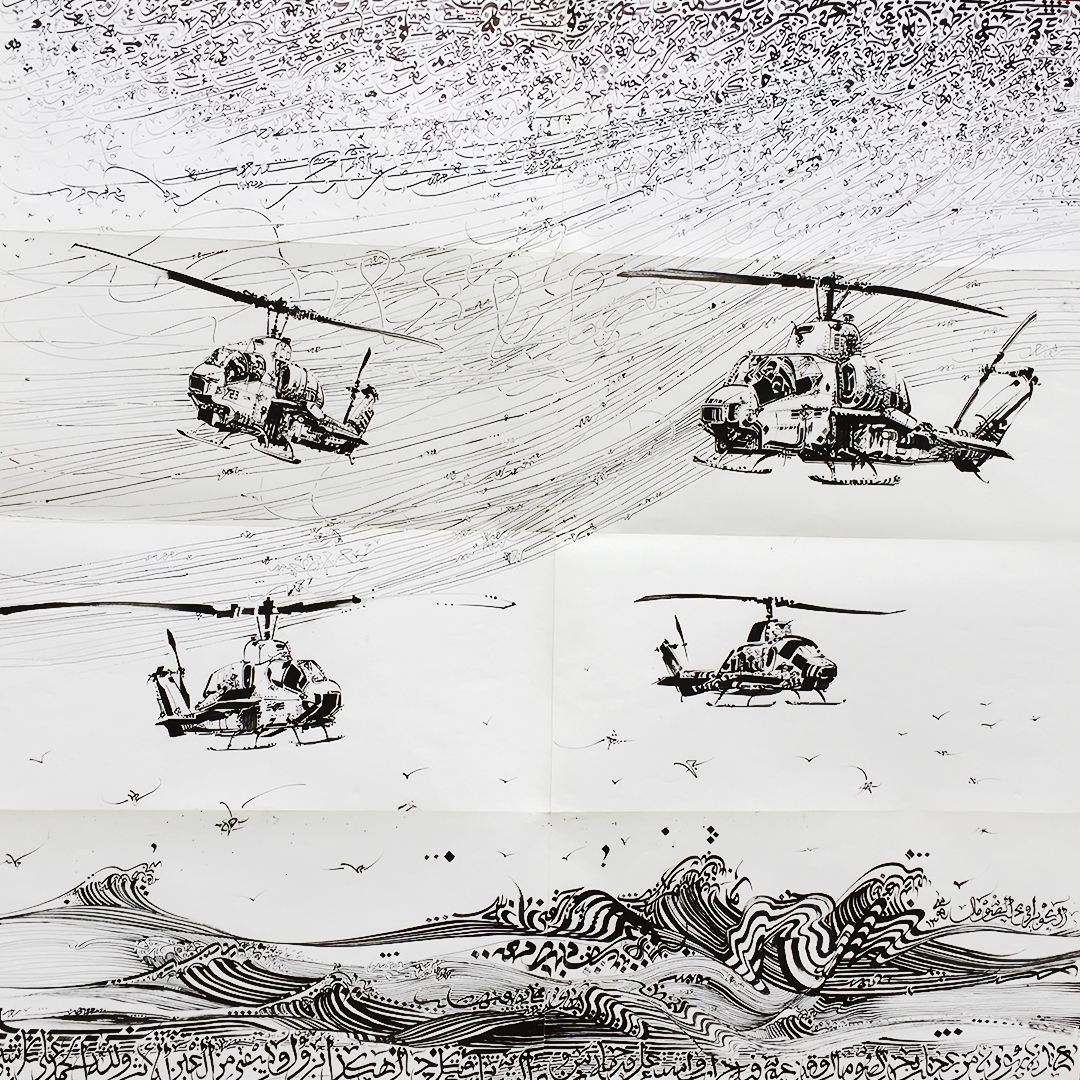 More recently, I’ve been working with WAD-MUSA Arts & Crafts to create prints out of my original works. Here is a short video of the crafting process for THE OSTRICH. The original work was created for the illustrated book INCHALLAH. Find the prints in my online shop.

" Hassan Musa gives way to his "mad" calligraphy technic for this beautiful and funny short tale on wisdom, where truth and lies mingle... The minimalistic layout, and the incredible freedom of the artist's brush contrast with the austerity of the black and white images. A metaphor to the tale, both serious and mischievous, making this small picture book a true success. " - The Hidden Man: Sufi tales from Sudan (2), Grandir, 1997 - Book review in "La Revue des Livres pour Enfants" N°178 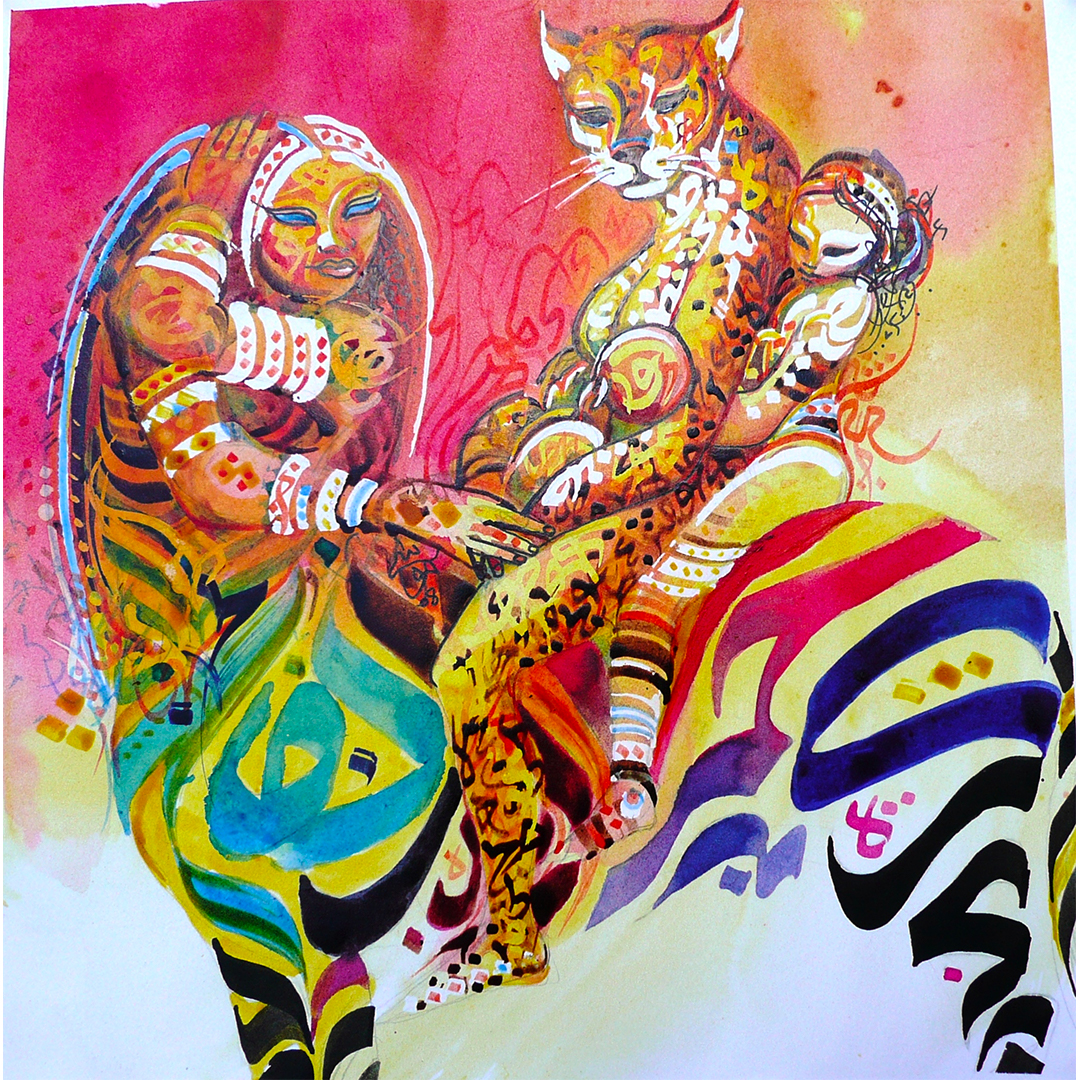 WHERE DO MY SCHEHERAZADES COME FROM?

The first time I read the 1001 NIGHTS, I’ve started wondering about the girls who preceded Scheherazade. The image of all their dead bodies piling up right there, at the very beginning of the story, would not leave my mind. Knowing this, I could not resolve to go through the Scherazade story with due serenity. I wanted to talk about them instead, the girls killed by a prince whom for ever enjoys total literary impunity 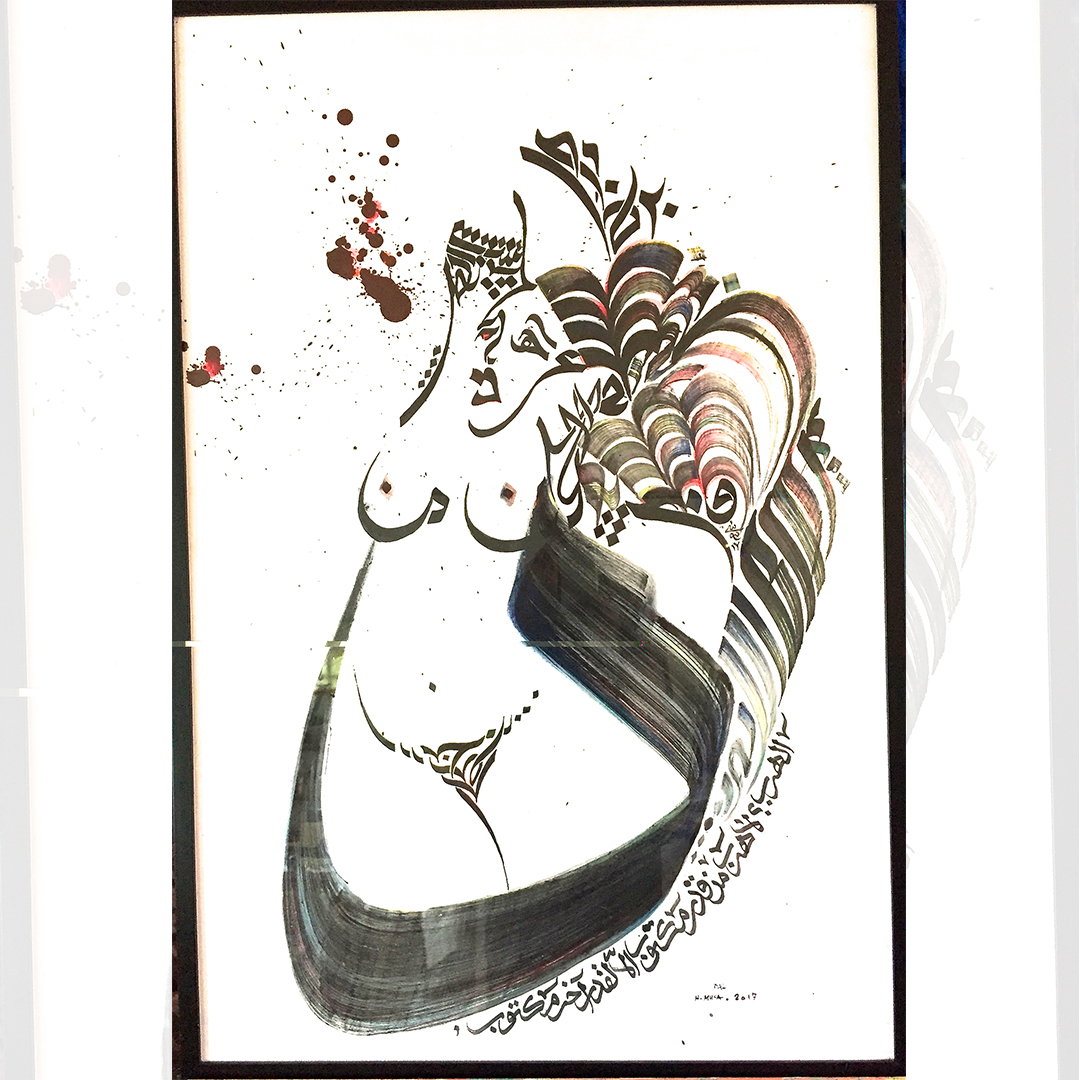 Most of my calligraphy works are small formats, black ink on white paper. However, I’ve also experimented on larger formats and on different medium such as on fabrics, or even old maps. 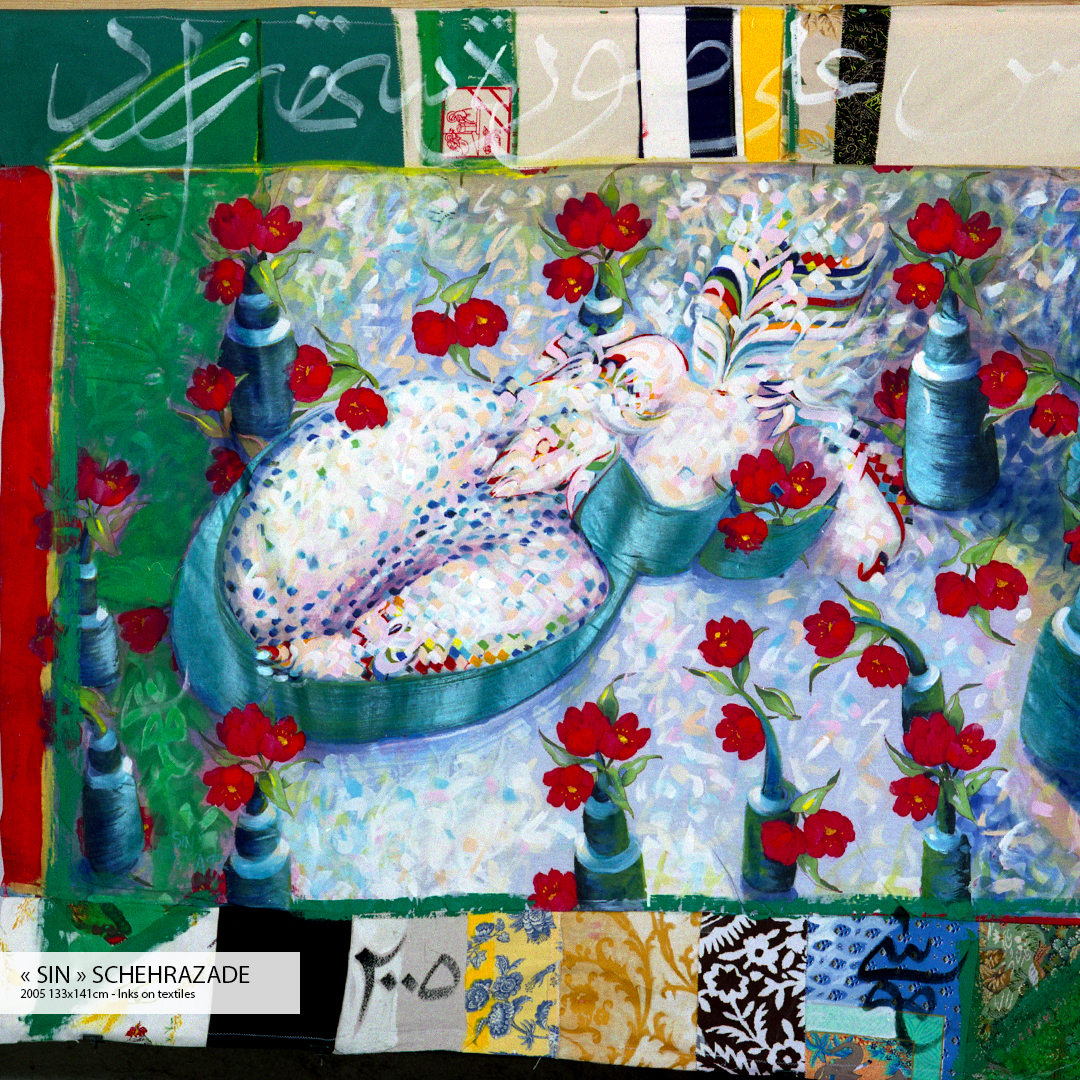 Amira Osman, prominent Sudanese women's rights campaigner was arrested in a night time raid on her home in Khartoum in 2022. Amira Osman campaigned for women's rights in Sudan under the Islamist rule of former President Omar al-Bashir, who was ousted during an uprising in 2019.

She was already arrested in 2013 under public order laws for refusing to wear a headscarf, and was convicted and fined in 2002 for wearing trousers. 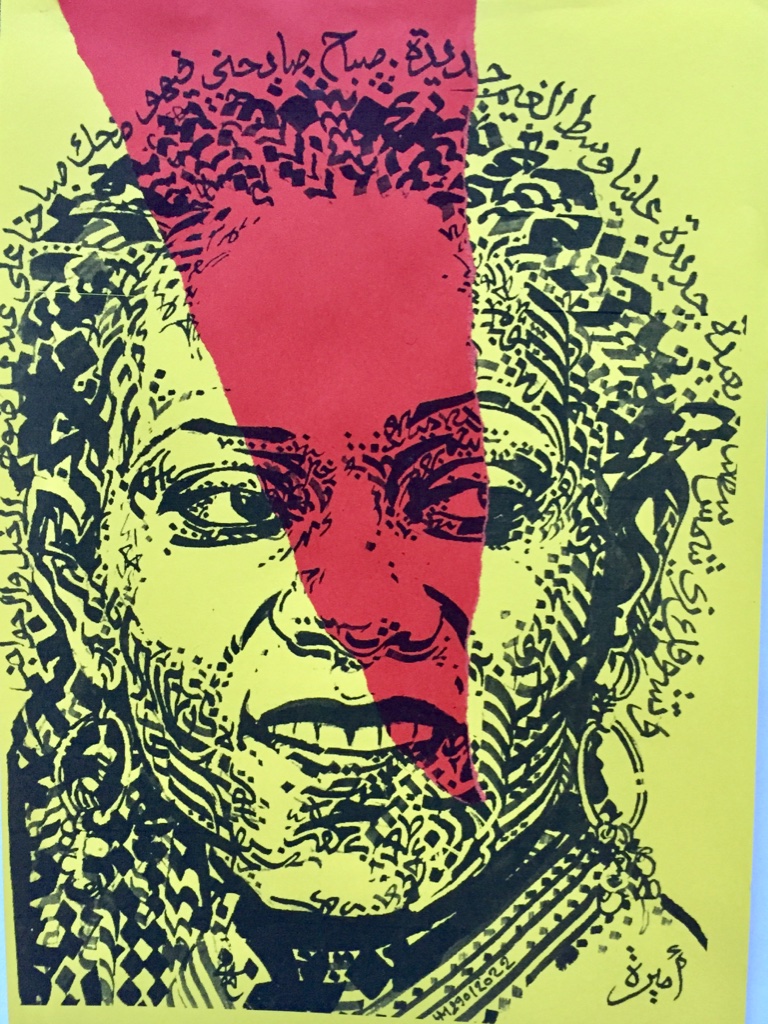 Ali Al-Mahi Al-Sakhi, a Sudanese trade unionist. He was the president of the Central Foundry Workers Union. After the Islamist Coup d' Etat of 1989, Al-Sakhi was taken into detention where he was tortured in the secrete detention centres called«Ghost Houses». Al-Sakhi died in London 1998 while he was receiving medical care to heal torture sequels 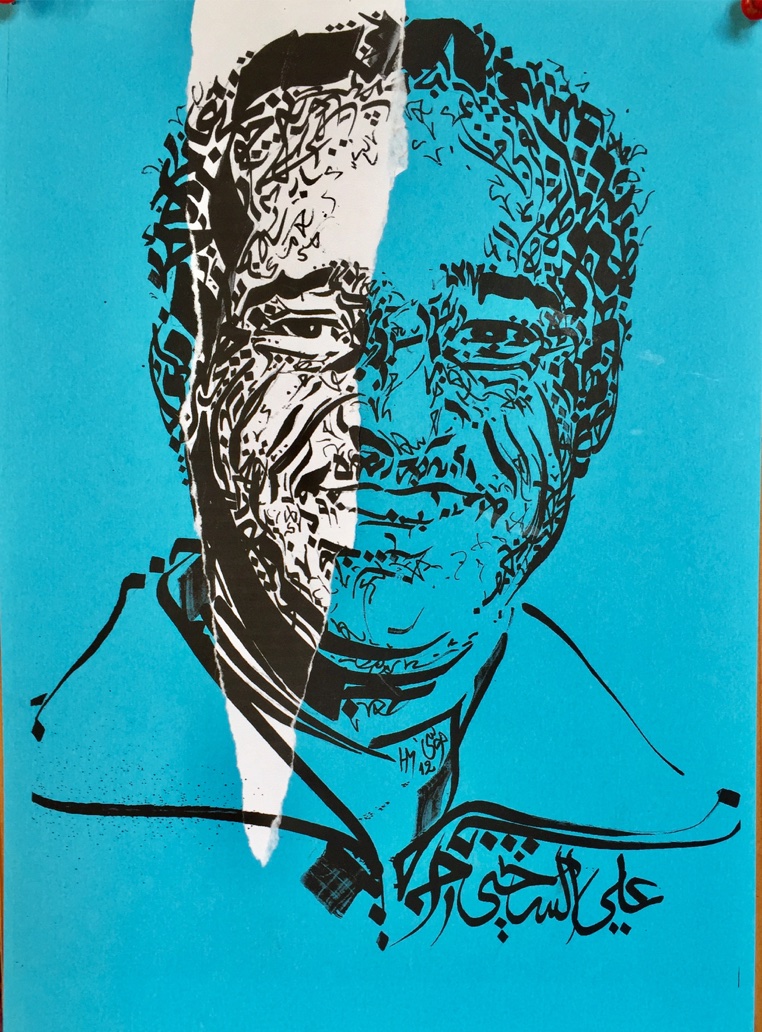 Rania Mamoun is a journalist and a writer. In 2013 she participated to demonstrations against the politics of General Al-Bashir. Rania and her brother were arrested in 2013. Rania was tortured by the security forces who accused her of slapping a security officer. I made this portrait as part of the campaign of solidarity with Rania while she was in detention. 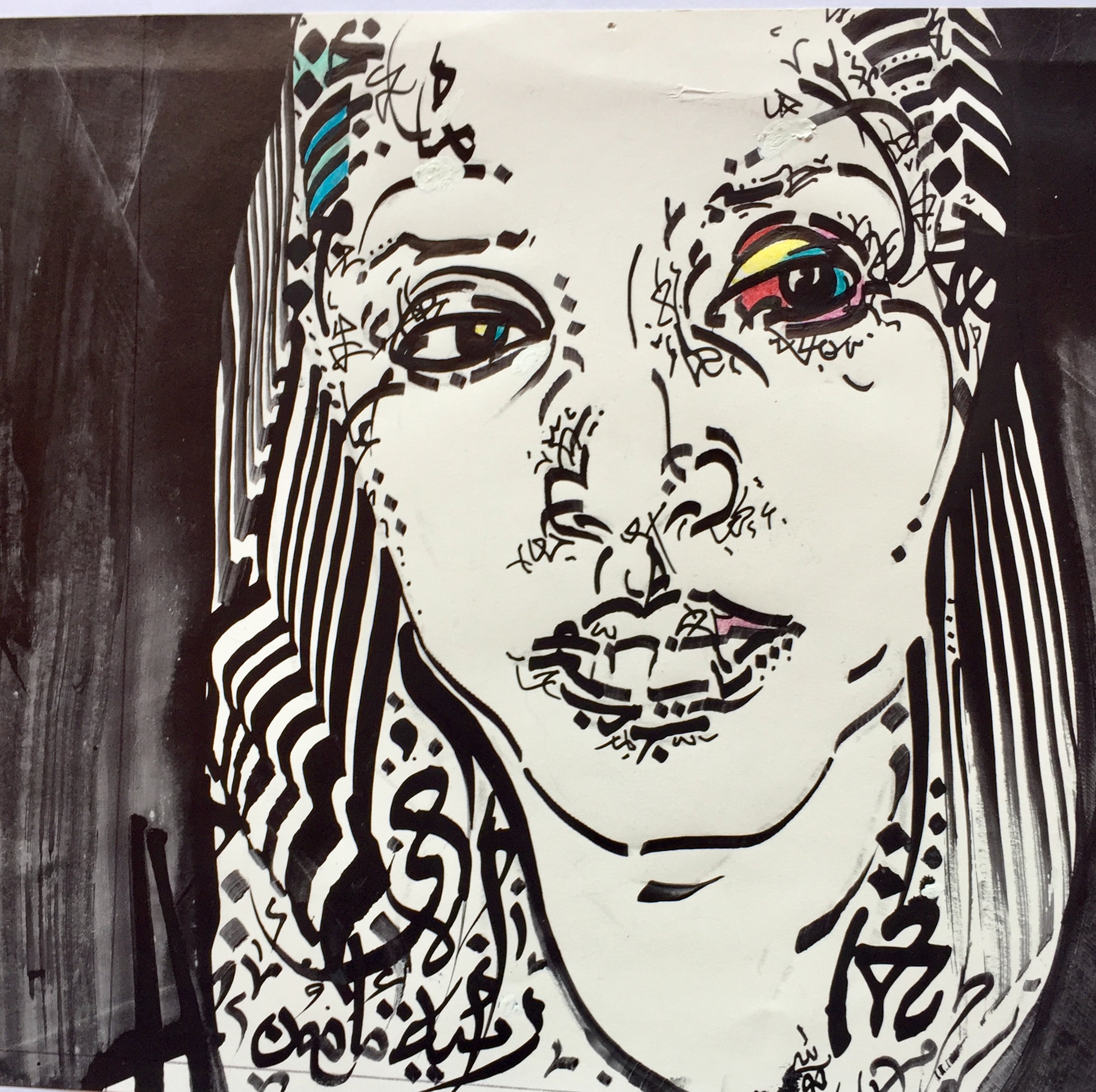 Mahmoud Mohammed Taha (1909 –1985), was a Sudanese religious thinker, a leader, and trained engineer, ushering in a renewed Islam based on freedom and equality. In 1985, he was executed for apostasy (Ridda)for his religious preaching by the regime of General Nimeiry. 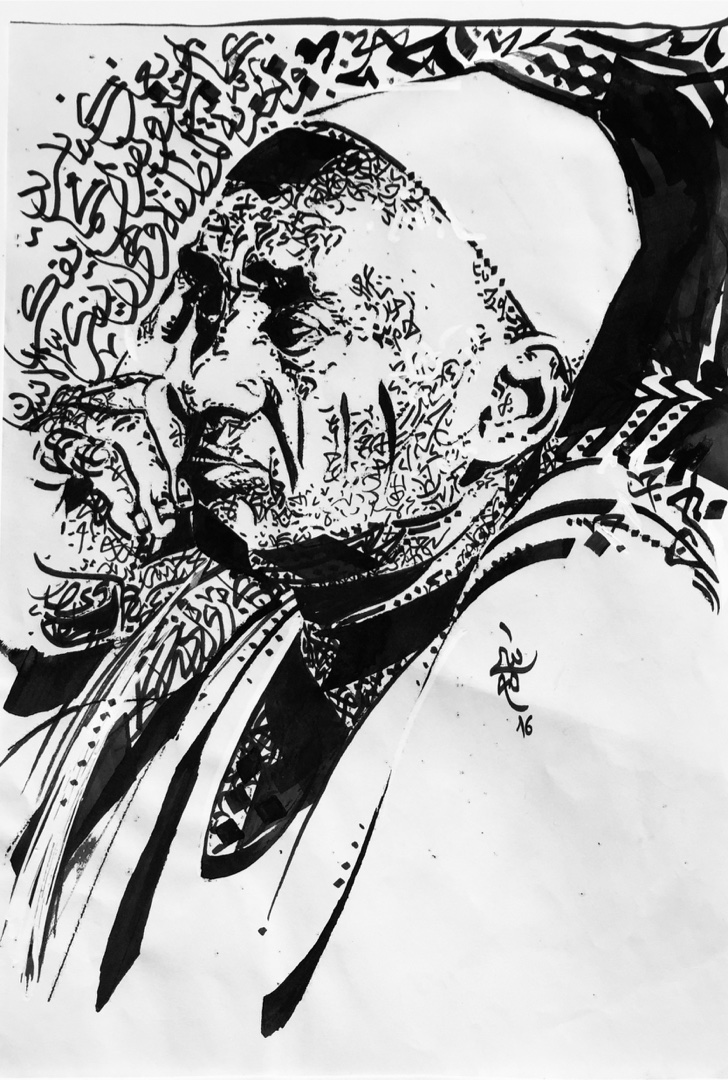 Some of my earliest calligraphy work was actually part of the scenography of a live dance show, LES GARAGOUZ (Ballet Naïlé), which toured in France in the 80s. As the dancers were performing on stage, I would improvise calligraphy on long pieces of paper hanging from the ceiling. I used flat brushes dipped in poster colours to write on paper fixed on fabrics.The 10 supports were prepared as scrolls spread vertically from the ground up to 3meters.I realized that the audience follow my graphical performance of the “False writing” with a special fascination. From time to time those who could read arabic come and ask me if it is Arabic writing, because they couldn’t read my texts. I used to argue that it is Arabic writing but it is a visual text. 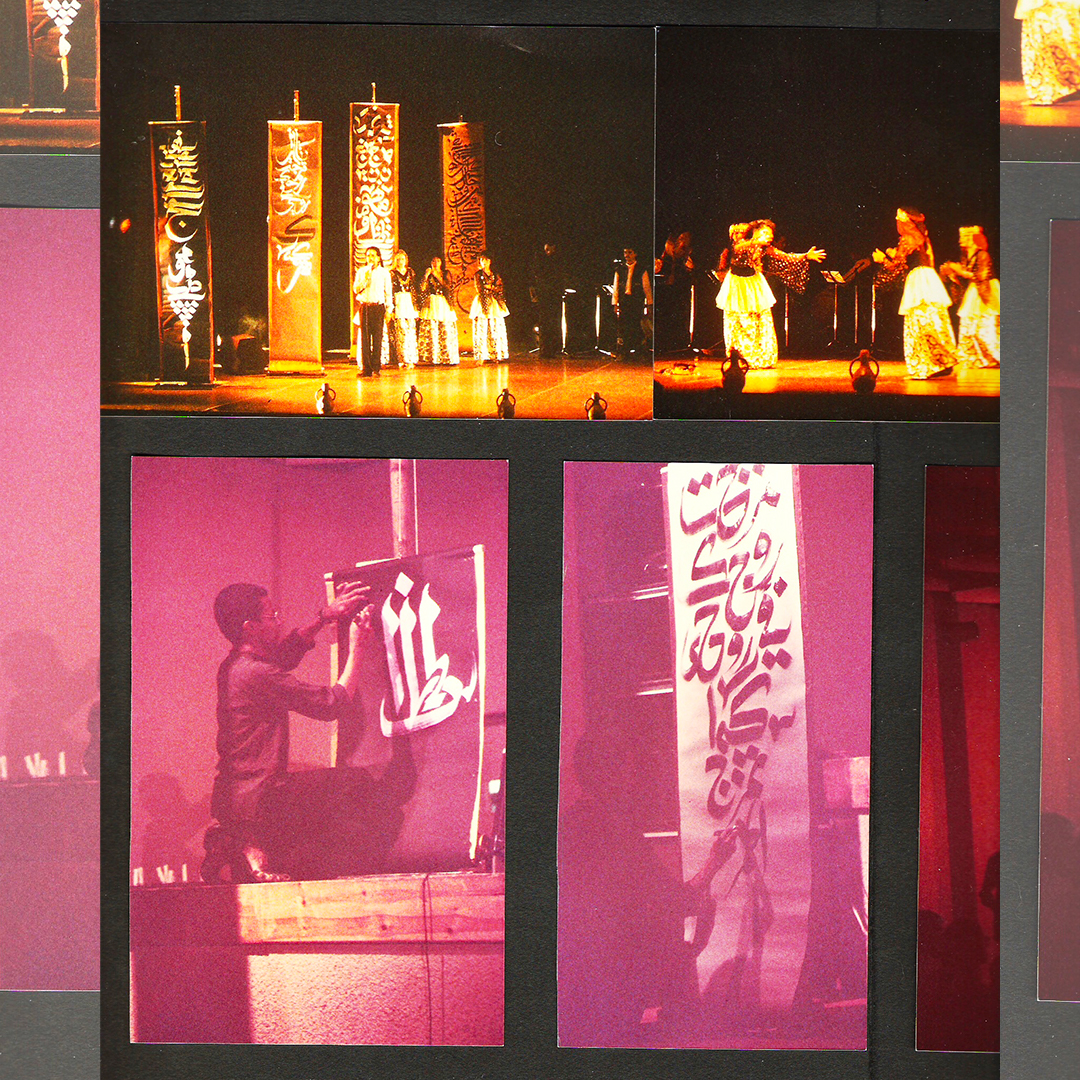 THE « ART OF INK » ANECDOTE: WHAT IS CALLIGRAPHY?

The conventional definition of calligraphy limits itself to writings only. That is the reason why I called this online series MY CALLIGRAPHY.

Back in May of 2019, I was contacted by the Art of Ink International Society to participate to an exhibition of contemporary calligraphy. As I happily accepted the invitation and sent 4 images of my calligraphy work, I received an answer from Ronald Nakasone, one of the organizers of this event:

« The Society exhibits the hand written word; illustrations, if any, should be secondary. » . He added : « .. the Society is interested in expressive potential of the brush and the aesthetic of Chinese/Japanese ideograms and/or phonetic symbols ».

Nakasone’s word revealed to me a misunderstanding about the sense of the word calligraphy. The idea of considering my graphic work in terms of « calligraphy » or « illustration » never crossed my mind. I am neither an illustrator, nor a calligrapher and I do not feel comfortable in any of these « political » categories that enables authorities to use the work of creators. My work is about image making and I made my way through the calligraphers territory because this is where I found the kind of images inexisting elsewhere. […]

I think my training as a painter inspired me a non conformist attitude towards the tradition of beautiful writing. Such a liberty was, is, almost forbidden to conventional calligraphers trained to worship the so called tradition. My graphic explorations in Arabic calligraphy was not meant to make a Revolution or what ever! They are supposed to witness my curiosity towards the act of writing which is the most popular form I know of image making. 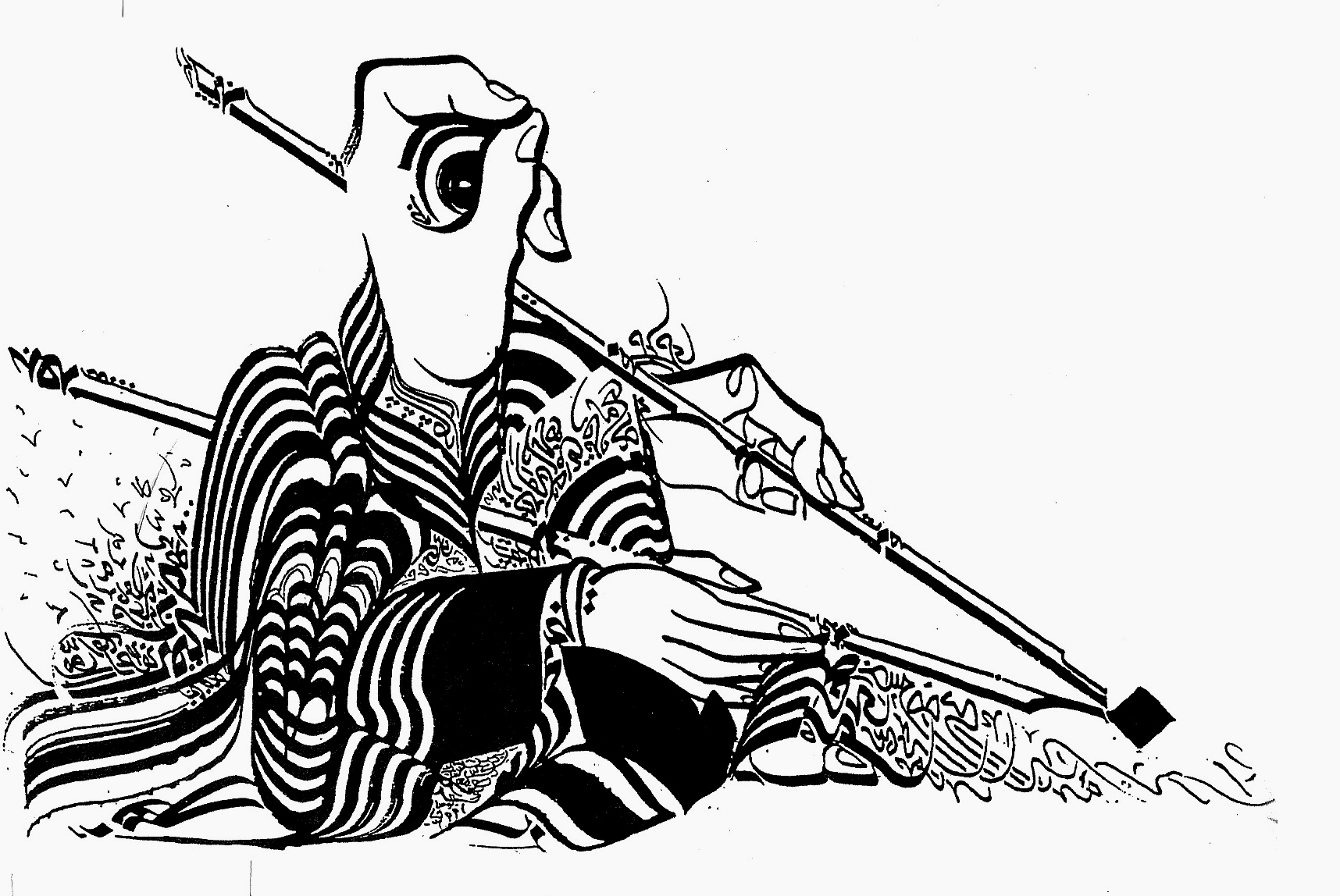