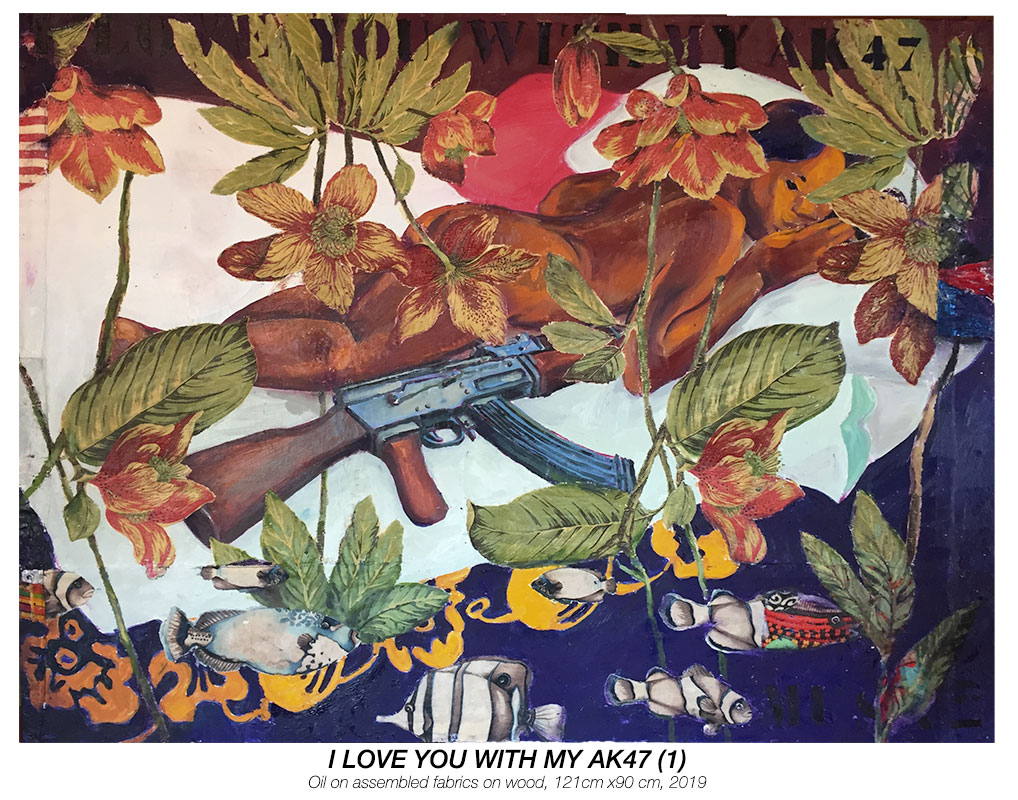 I LOVE YOU x COLONIES

Working on Monet in his Zouave uniform made me think about the situation of European artists in the colonies. One of the iconic figure related to this topic is Paul Gauguin. Gauguin’s work inspired me when I started a new series of images entitled « I LOVE YOU WITH MY AK-47 ». An AK-47 (Automatic Kalashnikov 47) is not only a gun but it is also a symbol of armed Liberation movement in the colonies. The first image of this series refers to Gauguin’s famous « Spirit of the Dead Watching ». In Gauguin’s artwork, his 13 years wife, Teha Mana, lies near the famous rifle AK-47. 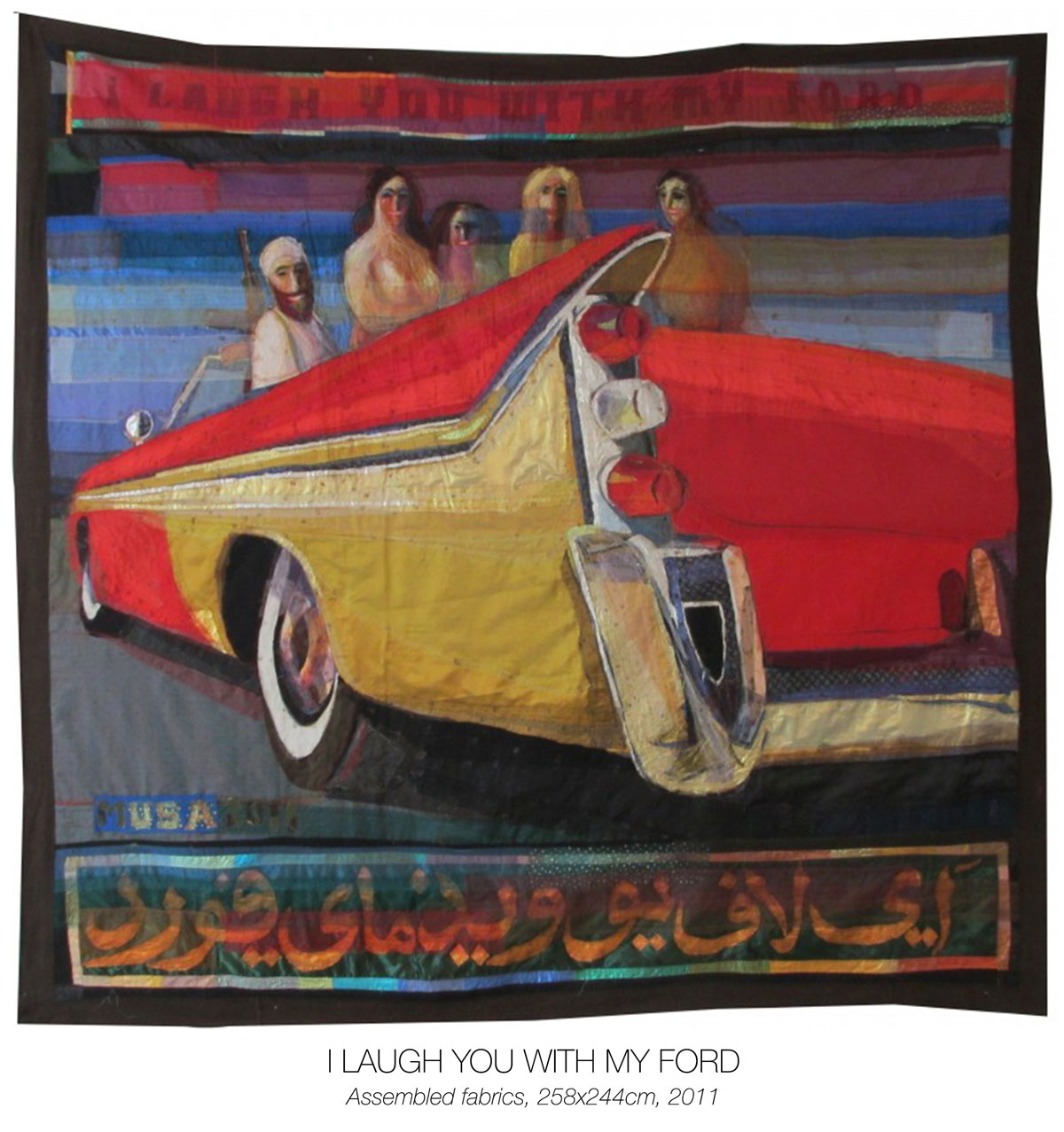 I LOVE YOU x I LAUGH YOU

Let’s get back to the origins of my I LOVE YOU series. In the 60s, pop-art artist and former advertising signs painter James Rosenquist, created powerful images using cultural icons and other popular symbols. Among his works was the famous I LOVE YOU WITH MY FORD. In 2011 I chose to twist this concept considering the recent world events (War in Irak and Bin Laden’s manhunt). I LAUGH YOU WITH MY FORD was the result of this « twist », as well of one of my first large assembled fabrics artworks. When I first wrote the title of this work in Arabic, I had to change the "v" to "f" (because there is no "v" in Arabic alphabet). My title became more ironic, changing "love" into "laugh". 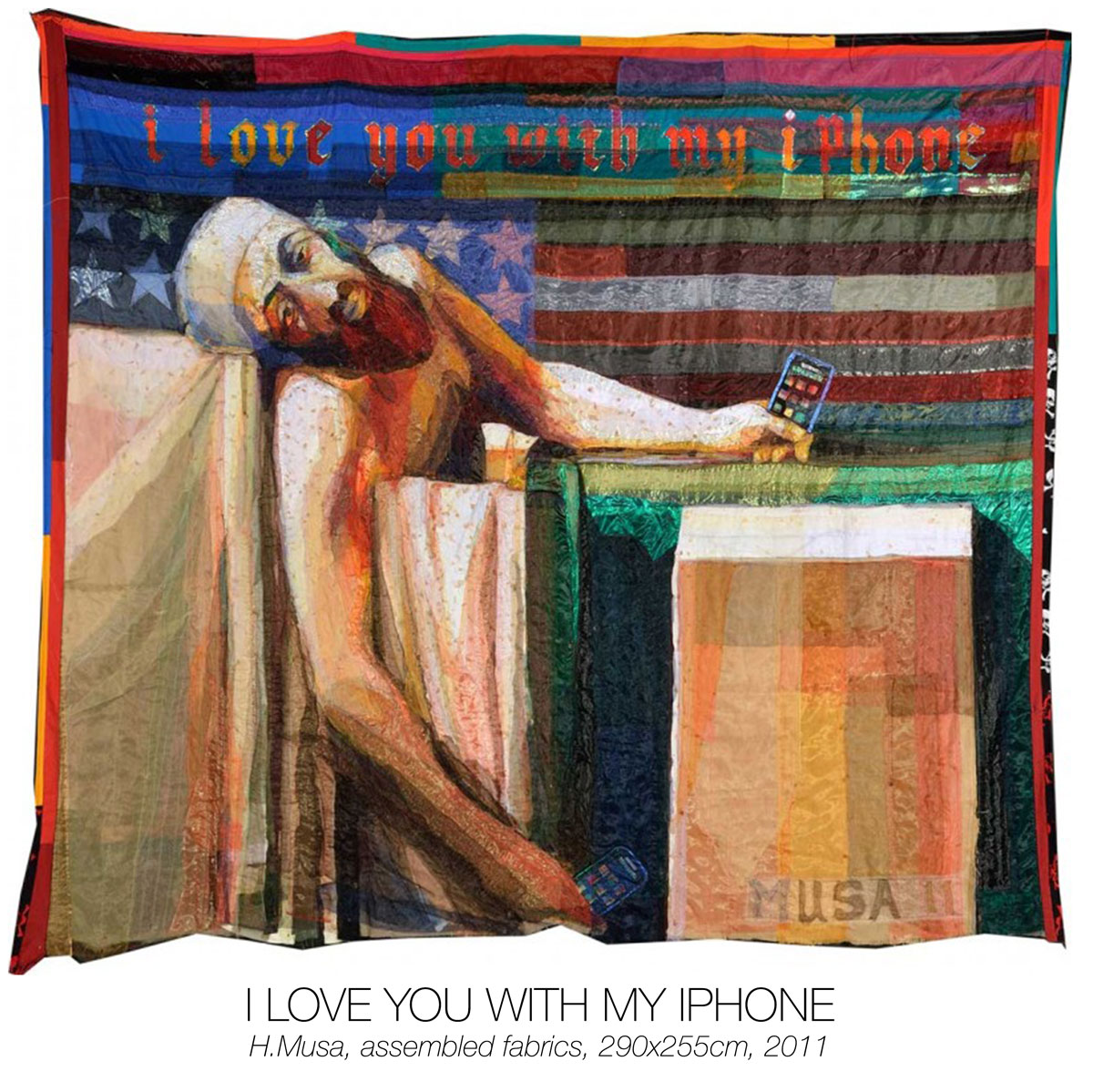 I LOVE YOU WITH MY IPHONE | INTERVIEW EXCERPT

« --AB: […] You returned to the figure of Bin Laden in I LOVE YOU WITH MY IPHONE (2011), an ironic take on The Death of Marat by Jacques-Louis David. In your opinion, did his image change in popular culture and media after his death? If so, how did you want to express this evolution through the shift from an odalisque to an assassinated political figure?

--HM: Bin Laden was never anything other than an image. He’s the image that the Americans chose, after September 11, to incarnate Muslims. During the Cold War, Al Qaida was allied with the Americans and Bin Laden was then the image of the combatant for freedom. Real men die normally and get buried, but icons can resuscitate if their producers decide so. Bin Laden, as an image that will never die, because he will be, forever hereafter, a media lever, fabricated by the American political machine, just like Marilyn Monroe, Che Guevara or the American Flag. »

Excerpt from The Postcolonialist « Poetics of the Visual Text: Interview with Hassan Musa » - By Alisa Belanger - February 2014. Read the full interview: http://postcolonialist.com/…/poetics-of-the-visual-text-in…/ 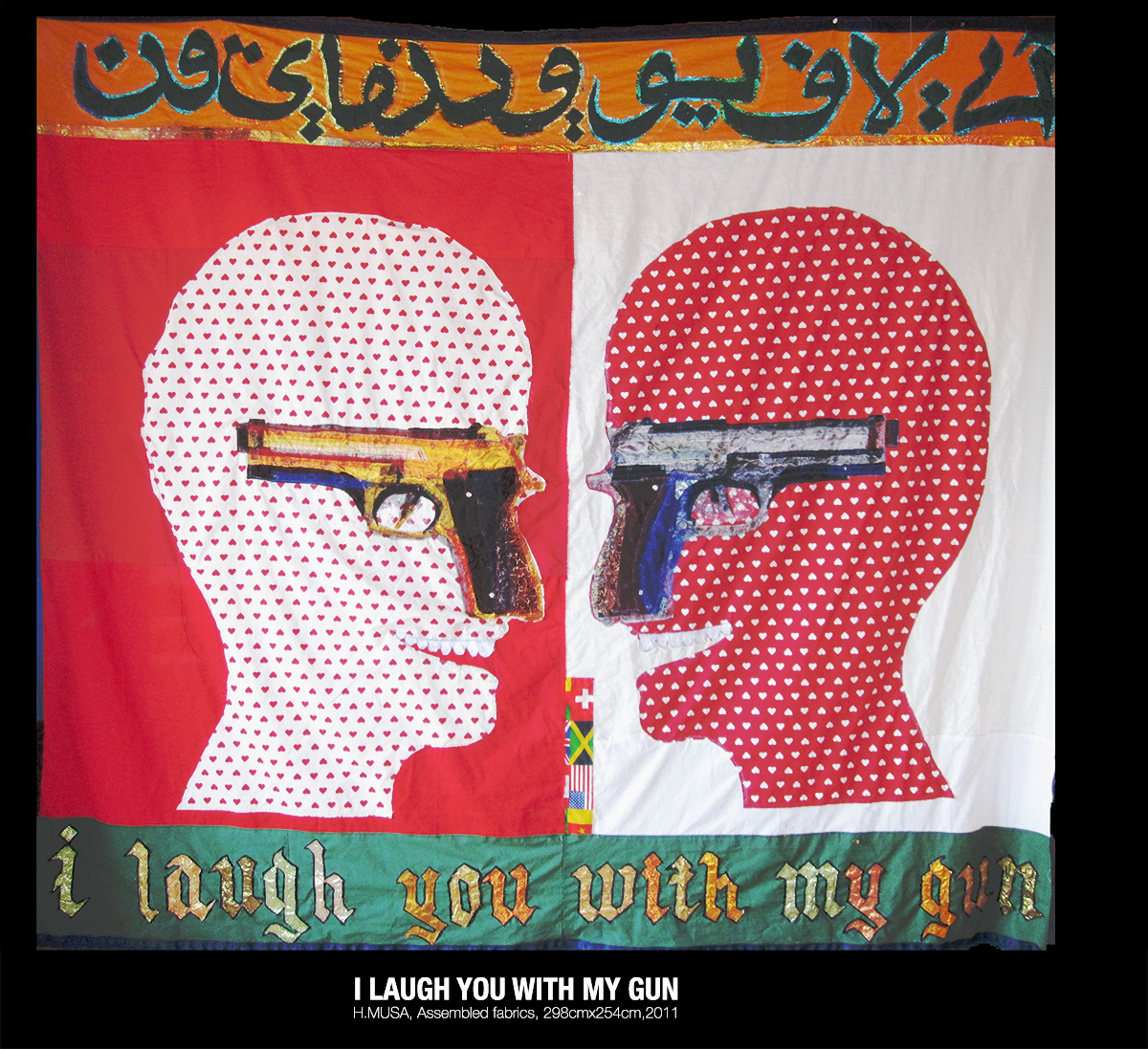 A reference to the irony of the weapon selling business, and the complicity between the countries benefiting from war signing billion dollar weapon sales contracts, while advocating for world peace. « The USA successfully imposed the muslim version of the « American way of life » to Middle-Eastern oil producing countries. « I LOVE YOU WITH MY FALCON » is part of the series inspired by « I LOVE YOU WITH MY FORD ». During the war lead by NATO against Gaddafi’s Lybia, the Qatari’s air force was the only Arab military force openly engaged in this war. This implication revealed the new geopolitics at work in the globalisation era: Western countries selling weapons to their Arab allies so they could fight in their stead.This was the end of Pan-Africanism and Arab-Nationalism. » — H.MUSA 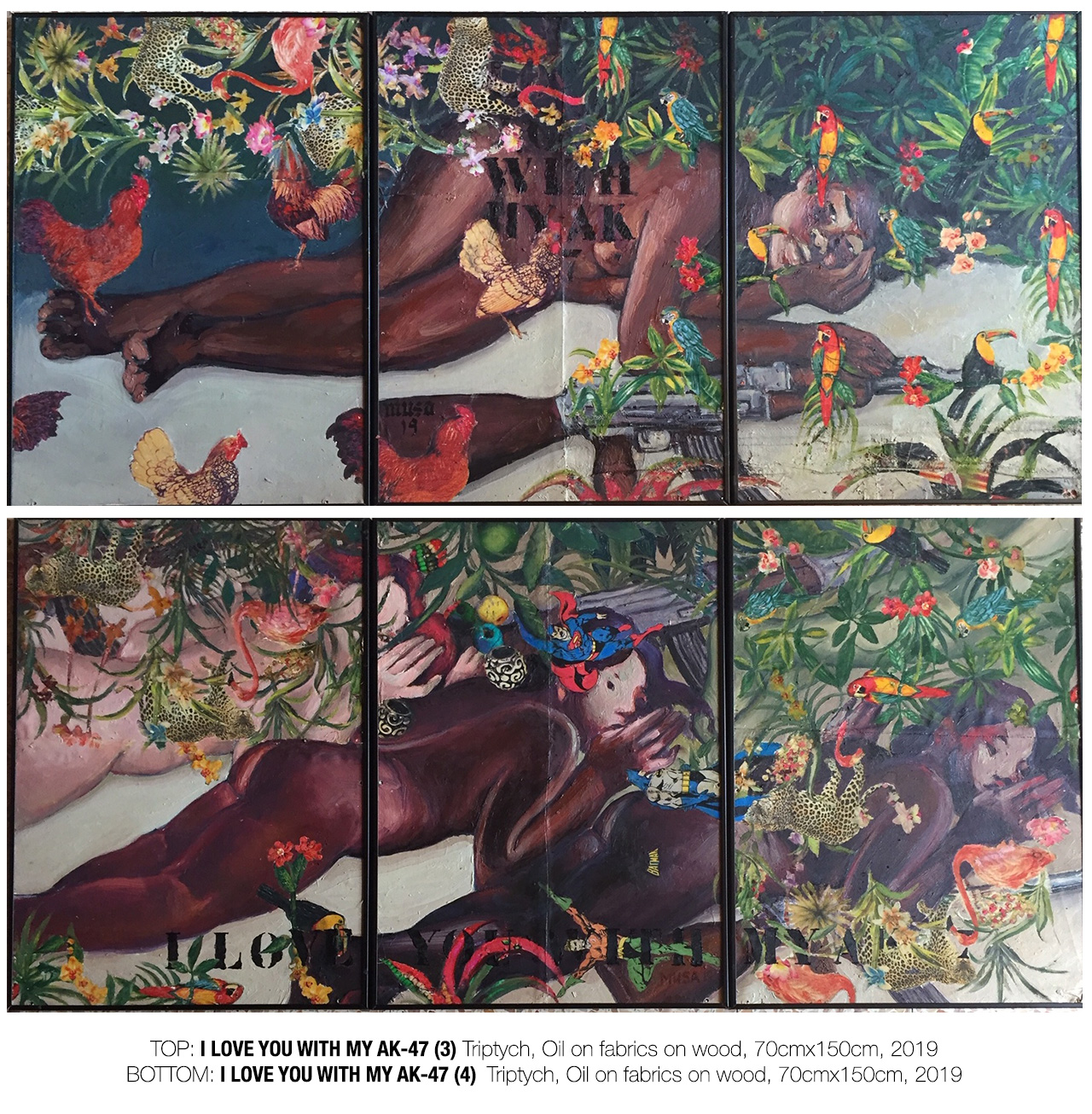 I LOVE YOU x GAUGUIN

The evolution of the I LOVE YOU series lead me to various re-interpretations of Paul Gauguin ’s work while approaching the question of European painters in colonies. I LOVE YOU WITH MY AK-47 features several of Gauguin’s works he created while staying in the French colonie of Tahiti. « Spirit of the Dead Watching », was introduced earlier in these posts, but there’s also references to « Nevermore » and « Alone ».

I LOVE YOU x DANGER OF SEEING

« What makes one image more dangerous than another? Is it the way we see the image or is it the way we use it? » — « The 19th century Romanticism celebrated the artist as a sacred figure, a Prophet or a Demiurge. May be this is why we expect artists to be naturally good, compassionate, progressist and even revolutionary. So, don’t worry if you feel disappointed when discovering the dark side of artists we admire. Artists, like everybody else, are ordinary and extraordinary at the same time. Recent research in Gauguin’s biography shows a disgraceful glorious bastard worthy of the devastating tragedy of colonialism […] ». Read the full text on my website: https://hassanmusaofficial.com/danger-of-seeing/ 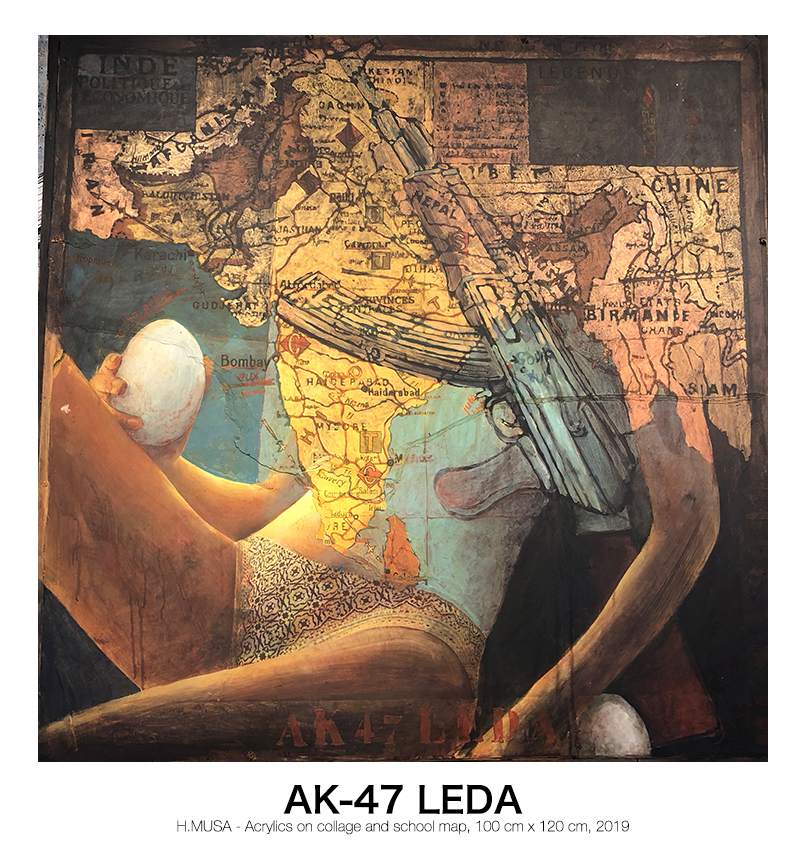 I LOVE YOU x LEDA & THE SWAN

Or the most celebrated story of rape in the art history. For centuries, painters and writers alike developed this topic. Most of them eliding the fact that it was the story of a rape. « Leda was a beautiful woman, and her beauty attracted the attention of Zeus, who spied her from his throne on Mount Olympus. The beauty of Leda roused Zeus to action, and the god transformed himself into a magnificent swan. Then, portraying himself as a bird escaping from a bird of prey, Zeus lay down next to Leda, and impregnated her. » Greeklegendsandmyths.com 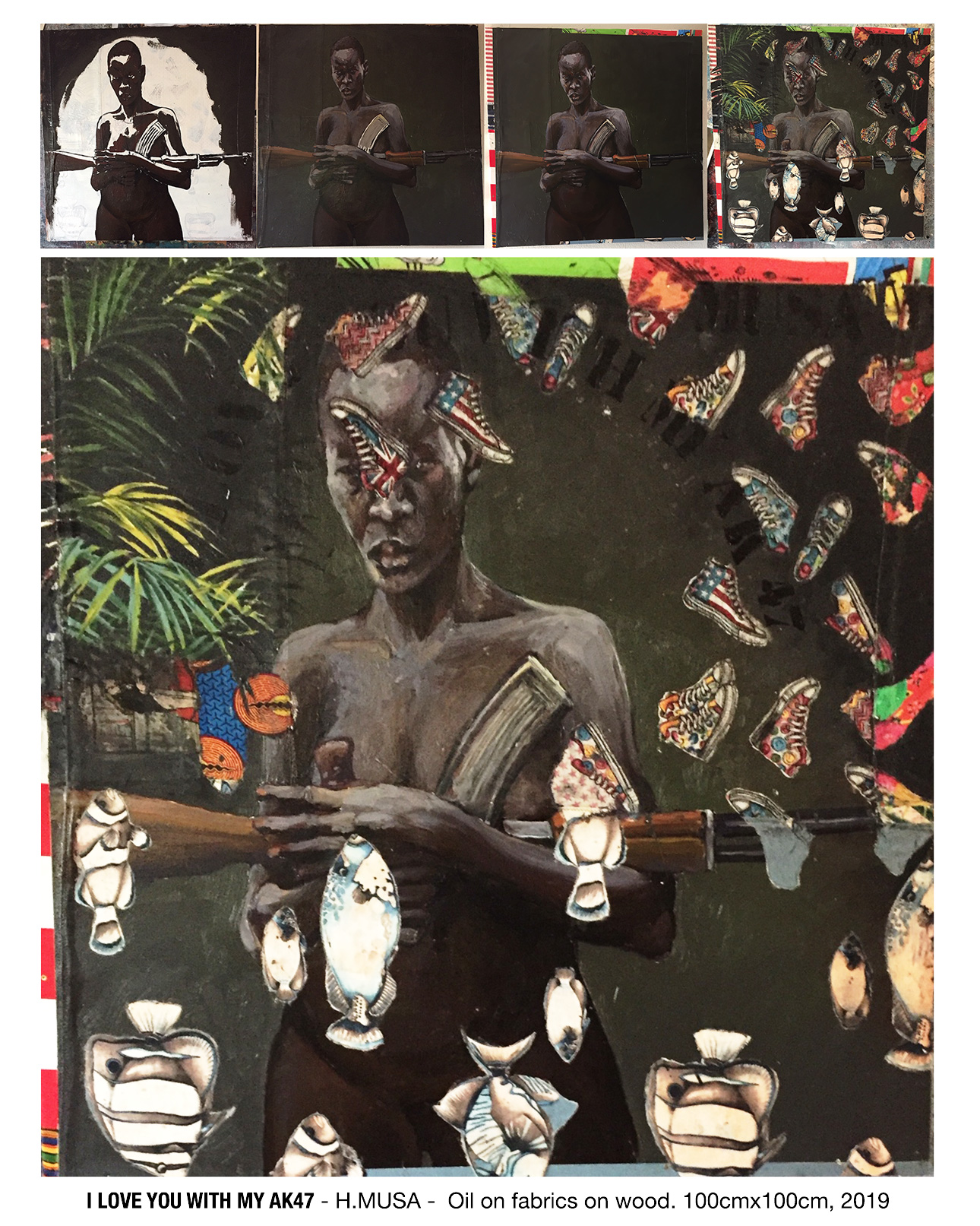 I LOVE YOU x REBELLIOUS BIRDS [WORK IN PROGRESS]

A few months back I shared photos about « rebellious birds », armed women in Ethiopia (Mursi), Sudan (Jabal Nuba, Darfur, etc.), who chose to arm and protect themselves in war zones. Today I guide you through the creative process of this work I made in reference to them. I LOVE YOU MY AK-47.